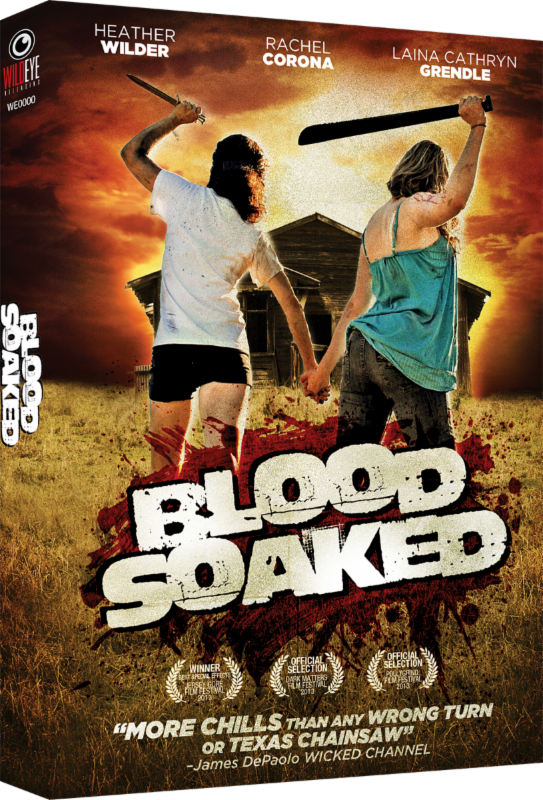 “Blood Soaked” follows a freshman coed (Heather Wilde) on her first day of college. She begins to fall in love with an older female student (Rachel Corona). The two women are enjoying their time together before they come across a couple of homicidal sisters. They discover the sisters plan to raise the dead and start the rise of the Fourth Reich. The couple must find a way to outrun the sisters before they become part of their twisted plan. I was kind of surprised that “Blood Soaked” was worth my time considering that I felt audio track seemed to a have a low pitch with the dialogue. When something goes wrong like that, it usually becoming distracting for me to the point that it usually hurts my enjoyment. But surprisingly it didn’t hurt it as much as I was into this film and enjoying it.

One of the main reasons for that was the direction. Writer/director Peter Grendel’s direction was very good. He does a very good job making sure that the film keeps moving at a good pace. It made some of the scenes work so well including the second half of the film. It got me interested with what was taking place in the film. The other thing I liked a lot was the way that Grendel transitions from color to black and white. It helps give the film its dark and horrific tone, which is needed for the film like this to work. The transition also helps what’s whatever horrific violence that’s put on onscreen feel horrifying as it becomes a very gory film in the second half.

Also, I enjoyed the acting here. Grendel does a very good job making sure that each of his cast brought some personality to their characters. It helped made the characters interesting and entertaining. He also a good job making sure his main cast developed chemistry and played off one another. It helped made scenes work very well, as I was into the film’s action and characters. Grendel’s screenplay was good. One of the things that makes it work so well was the fact that he does a good job developing his characters. He spends time developing these characters considering the film’s short running time. It helps made the characters either interesting or frightening to watch. The other thing that he does well with the screenplay was to keep you on edge. Whether it’s the gory violence or the film’s twist midway through, it does a good job providing some shock value to give the film’s story its grindhouse feel.

The DVD boasts a good amount of extras. First, there are three tracks on the disc. The first track on the disc is the filmmakers’ commentary on the film. The track features writer/director Peter Grendel and editor/director of photography Tyler King. It was a nice and entertaining track. The filmmakers did a very good job talking about the production of the film and the stories that happened on set. It made the track interesting to listen. The next track is the cast commentary featuring the film’s stars Heather Wilder and Laina Cathryn Grendle. This was also a fun and entertaining track. The two actresses share stories from their time on the set of the film while also providing some funny moments as they recall the film’s shoot. After that the tracks wrap up with the audience track from its screening at Pollygrind 2013.

The next featurette is the short film “This Side of Nightmare”, which “Blood Soaked” is inspired on. It’s different from the feature film, as its plays more like an abduction/serial killer film than a Nazi zombie film. I thought it was pretty good film and worth checking out after watching the feature film. Next on the DVD was the cast introduction of the film with stars Heather Wilder and Laina Cathryn Grendle. After that its “Two Drunk Girls vs The Introduction”. The featurette is a bunch of fun outtakes from the DVD introduction. If you liked their commentary track then you’ll like this. The disc then wraps up with original trailer for the film and trailers for other releases from Wild Eye Releasing.

Overall, this is a very good release from Wild Eye Releasing. Considering my minor grip with the film’s audio track, I still suggest you should check the film out as I had a blast with this film. With its good direction and solid acting, “Blood Soaked” is a must for B-movie horror and grindhouse fans to check out.