"Wish I Was Here" Review - Written by Jim Herling 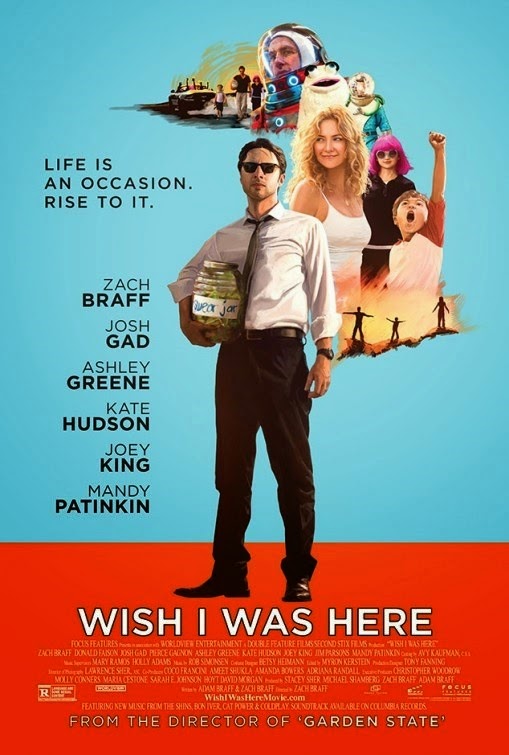 Every now and then a movie comes along that is so entertaining, so beautifully crafted, so just all-around great that it reminds me why the film industry is something I've loved and wanted to be a part of for so long now. Garden State was one such movie. Zach Braff's directorial debut, which he also wrote, is an amazing film that quickly became my second-favorite movie of all time and made me a fan of his for life (okay, yeah, Scrubs helped, but that's neither here nor there). It's been a decade since Garden State came out and Braff has stuck to starring in other people's flicks since then, but now he's finally sat back down into the writing and directing chairs.

And with Wish I Was Here, he's done it again.

Wish I Was Here is almost a thematic sequel to Garden State, with Braff (perhaps I should say Braffs, as Zach's brother Adam co-wrote the movie with him) revisiting themes like unhappiness with an unfulfilled life and people being completely disconnected from the life around them. This time around, instead of a young actor who inevitably gives up his career like Braff's Garden State character, we get Aiden Bloom, a thirty-five-year-old married father of two who is still trying to make it as an actor, almost wholly unsuccessfully. His wife, Sarah, played wonderfully and emotionally by Kate Hudson, supports him while working full-time... and is just as unhappy as him because she hates her job and the sexual harassment she's receiving there. She also hates the fact that they can't afford to send their kids to private school without Aiden's father paying for it, and when his cancer comes back, the money goes away. His father Gabe, by the way, is a grumpy old Jewish man who loves both his sons (Aiden has a brother, Noah, played by the always funny and surprisingly touching Josh Had, who hasn't spoken to Dad in years and also has a hysterical subplot involving cosplay, a girl played by Ashley Greene, and San Diego Comic-Con that is just perfect) even though he can't bring himself to say it because he disproves of their life choices.

See? Everyone in the movie has problems connecting with their lives, even the Bloom kids, who have to deal with being yanked out of their private Jewish school to be home-schooled by Aiden, whose shaky relationship with his faith is a whole other hurdle for the kids. This is especially true of daughter Grace, played by the incredibly impressive Joey King. But it's not just her; I can't rave about this cast enough. All the stars are given so many emotional beats to go through, and they all handle it wonderfully, as they do with all the comedy. The Braffs' script comes bubbling over with just as many laugh-out-loud moments as emotional and thoughtful ones. Some of the funniest moments come from the cameos; Jim Parsons in particular is great. As is Donald Faison in his brief appearance.

And if you think Turk and J.D. reunited didn't have me smiling in my seat and singing Guy Love in my head, you don't know me very well. All I needed was an , "Eagle!"

Comedy. Emotion. Intelligence. Great performances. What have I missed? Music! As a director, Braff really can wield music like a weapon to enhance a scene. He does it just as well here as in Garden State. His cinematography is just as on-point too, with some truly beautiful sequences. And also like Garden State, this movie really stocks the landing with a great ending. The only flaw to the whole movie in my mind might be that the ending goes on just a bit too long, but I can overlook that because part of me didn't want the movie to end anyway.

Braff really needs to write and direct more often. When he does, he produces movies that become my favorites: first, my second-favorite movie of all time; and now this gem, easily the top contender for my favorite movie of the year. Wish I Was Here gets a rare five out of five stars from me, with the recommendation that you should all just go see it. Trust me, you won't regret it.
at 1:15 PM
Labels: Focus Features, Reviews, Wish I Was Here, Zach Braff