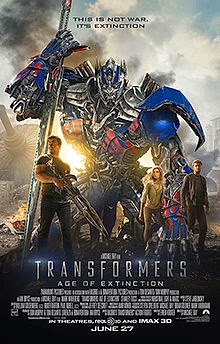 It's hard to review a Michael Bay Transformers movie. To be totally honest the idea of it almost feels a little pointless; Bay movies are pretty divisive among movie-goers, who either love what he does or hate him for it. The Transformers franchise is certainly no exception, and neither is this latest installment. If you liked what came before, you'll like Age of Extinction. And if not, well, you get the picture.

Transformers was my favorite cartoon growing up, and yes, I'm one of the people that likes the "Bayformers" movies (except for Revenge of the Fallen, that is; I don't think anyone anywhere likes that blistering turd). In fact, I absolutely loved the first one, and I really enjoyed Dark of the Moon despite the ridiculous title. I actually think Age of Extinction might just be the second-best movie in the series. I tell you all this to let you know that there might be a bias here, but bias or not, in no way do I think this was a perfect movie.

One of the problems is the plot. Unlike the last two movies, the problem isn't that the plot doesn't make sense; it's that there's too damn much of it! Optimus Prime (once again voiced by the inimitable Peter Cullen) is discovered in hiding by the absurdly-named Cade Yaeger (Mark Wahlberg), an inventor and incredibly overbearing, overprotective father. His daughter Tessa (the gorgeous Nicola Peltz) isn't even allowed to date until she graduates high school. It turns out Prime is in hiding because a shadowy group within the CIA named Cemetery Wind, led by Harold Attinger (Kelsey Grammer) and his henchman James Savoy (Titus Welliver) are looking for him. Nominally, Cemetery Wind is supposed to be hunting down and destroying rogue Decepticons who survived the Battle of Chicago but instead are secretly hunting down and destroying Autobots as well. They have help in the form of Lockdown (Mark Ryan), a bounty hunter Transformer who is neither Autobot nor Decepticon but has his own reasons for hunting down Optimus Prime. Cemetery Wind's hunt for Prime sucks the Yaegers and Tessa's secret boyfriend Shane Dyson (Jack Reynor) into the conflict and sees Prime reunited with the only Autobots left on Earth: Hound (voiced by John Goodman), Drift (Ken Watanabe), Crosshairs (John DiMaggio) and of course, Bumblebee, whose first appearance onscreen got one of the loudest ovations I've ever heard. That sounds like a pretty full plot right there, right?

Amongst all that, Stanley Tucci plays Joshua Joyce, a billionaire inventor whose company has created transformium (I kid you not), a new metal created from the remains of dead Transformers that lets his company build Transformers of their very own. They've already created Stinger, who is a supposedly upgraded version of Bumblebee, and an Optimus Prime clone named Galvatron.

I won't spoil anything here but anyone with any Transformer knowledge at all probably knows where the Galvatron plot is going.

I could tell you how these threads all come together but as I said, no spoilers. I will say that they do all come together, although not always gracefully, in just one of a number of massive action scenes (I will say this in Bay's defense here: most of the action scenes, which in previous installments always came under fire for being jumbled messes, are much clearer and more coherent this time around). It's a flaw of Ehren Kruger's screenplay that attempts to do to much, including giving the Autobots and Optimus Prime in particular a darker character arc in a darker story than ever before. I applaud going dark for a change, but having Prime and his soldiers look forward to killing humans, regardless of what humans have done to them, feels like too far a leap even in a franchise about giant, transforming, alien robots blowing each other up.

Speaking of Kruger's writing and humans, what he gives his human cast to work with is shameful, especially considering it's possibly the best cast ever assembled in franchise history. Grammer and Welliver are both great as villains who don't think they're really all that bad, and Tucci is really good as well when he isn't going too far over the top. Wahlberg, however is written too simply and his nobility is overshadowed by both how annoyingly overbearing a father he is and how annoying the voice Marky Mark chooses to use is. Nicola Peltz is probably the most talented female lead the series has had yet, which isn't saying much. Still, they're all light years better than Shia LaBeouf, his ridiculous parents, and especially John Turturro, although I did find myself missing Josh Duhamel's army crew's presence in the proceedings.

So let's review: flawed plot; mediocre dialogue delivered by actors that, while improvements over prior casts, could still do better (except the Transformers voice-actors, who were on-point and easily the best the franchise has had); and crazy giant robot action. Like I said, it's a Michael Bay Transformers movie, and we got more of what we knew we'd get, with the added bonus of this one setting up plot threads for two more flicks. If you don't like that sort of thing, this flick won't change your opinion. But if you do like that sorry of think like I do, you'll enjoy it, and I enjoyed it to the time of three-and-a-half stars out of five.
at 7:16 PM
Labels: Mark Wahlberg, Michael Bay, Paramount Pictures, Reviews, Transforme​rs: Age of Extinction