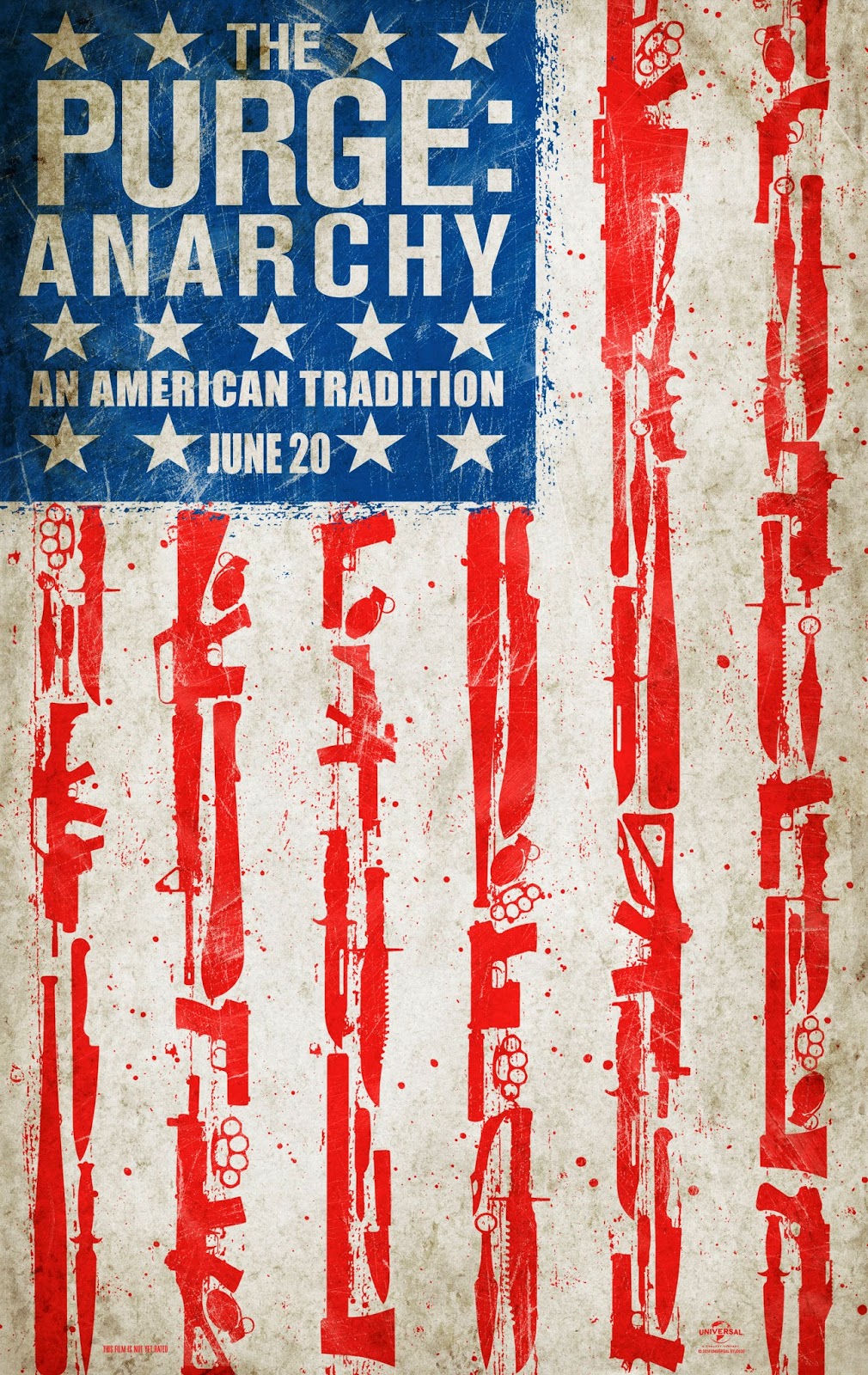 'THE PURGE: ANARCHY': Four Stars (Out of Five)

Sequel to the 2013 hit horror flick about an annual 12 hour period of time when all crime is legal. The original film focused on one family, who's attacked in their home during 'the Purge'. This installment tells the story of a cop, a mother and daughter and a couple who all meet and try to survive the Purge together. It was once again written and directed by James DeMonaco and co-produced by Michael Bay. It stars Frank Grillo, Carmen Ejogo, Kiele Sanchez, Zach Gilford, Zoe Soul and Michael K. Williams. I thought the first movie was interesting (and as disturbing as fuck). This film is even better!

Grillo plays a police sergeant named Leo Barnes. While most people try to stay safe at home, during the Purge, Barnes ventures out into it. He lost his son a year earlier and wants revenge. Sanchez and Gilford play a couple named Liz and Shane. They're driving to Shane's sister's house, to hide out at during the Purge, when their car breaks down shortly before 'commencement'. Ejogo plays a waitress named Eva. Eva is struggling to make enough money to support her sick father, Papa Rico (John Beasley), and young daughter, Cali (Soul). Their apartment building is attacked by a death squad and Eva and Cali are dragged out into the street. Leo sees them about to be killed and reluctantly intervenes. Eva and Cali then look to Barnes for protection. So do Liz and Shane, as they try to escape the gang chasing them.

I find the premise for these movies to be pretty interesting; it's a flawed one but still makes for compelling movies. The first movie was memorable because of the unique plot but it didn't explore the concept very much. It was well directed, disturbing and has a great performance from Ethan Hawke though. This sequel takes the great ideas of the original film and expands on them; it really examines what a society, that lives in a world like that, would be like. It also explains the government's main reasoning for the Purge. The characters are all likeable and Grillo makes an awesome anti-hero. I cared about the central characters so much that I even got a little choked up at the ending. I can't remember the last time I did that during a slasher flick. These films are definitely horror done right!
at 6:50 PM
Labels: Reviews, The Purge:Anarchy, Universal Pictures