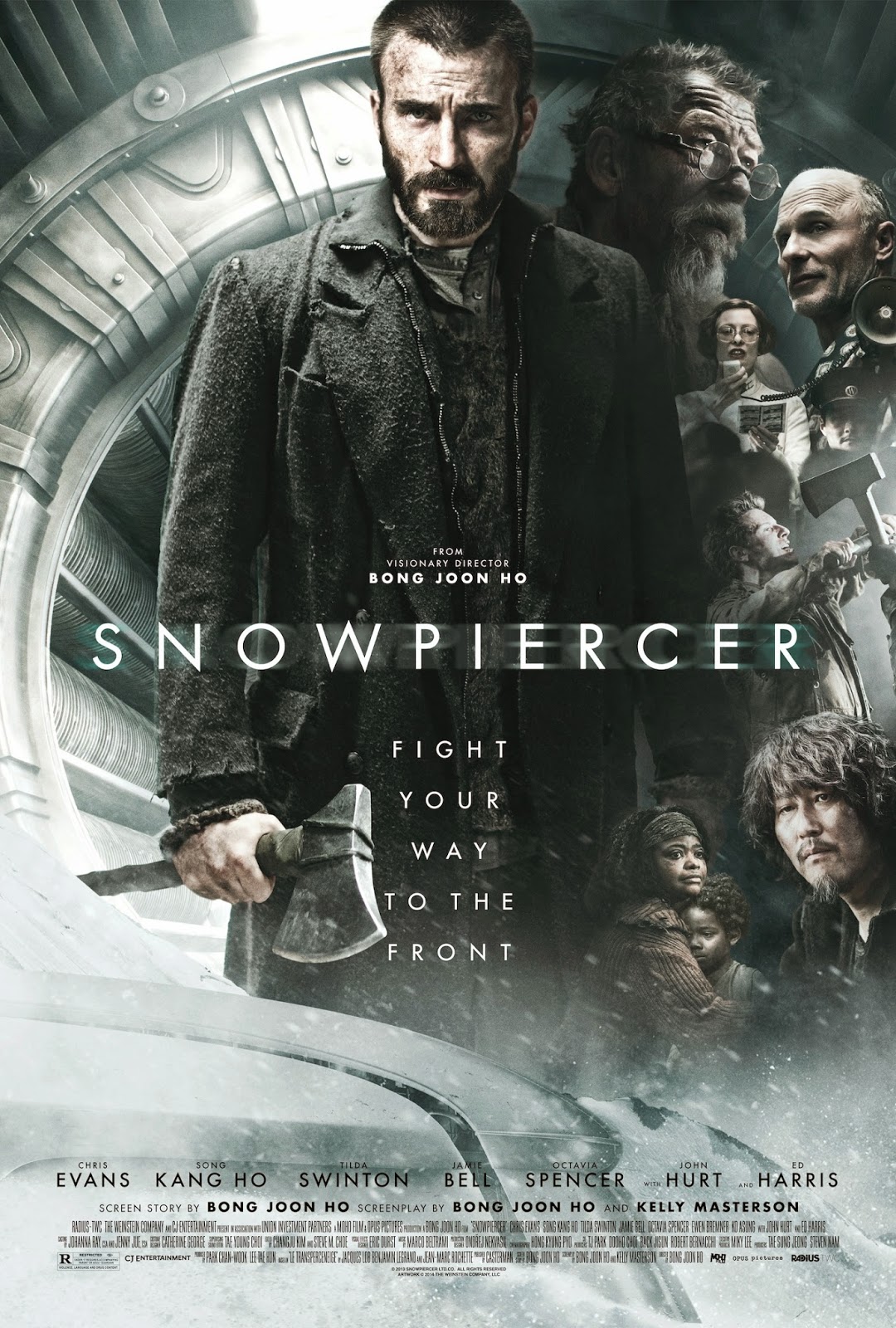 Sometimes all a movie needs to keep it going is a good idea. The idea behind Snowpiercer is more than good enough to keep it chugging down the track (fair warning: I might not be able to keep myself from filling this review with bad train metaphors...). This 2013 film directed by Joon-ho Bong and written by Bong, Kelly Masterson and a few others that has finally been released has one of the most interesting premises I've seen in awhile.

Sometime in the not so distant future an attempt is made to stave off the dangerous effects of global warming by releasing a chemical into the atmosphere that is meant to quite literally cool the whole Earth off. The plan backfires however as the chemical works too well and ushers in a new ice age, making the world too inhospitable for life to survive anyway. The survivors of mankind are herded onto a train that circles the world indefinitely, keeping them warm and alive and safe.

That's one hell of a movie idea there, right? Just wait, it gets even more interesting.

On the train humanity is divided into two groups: the rich and important... and everybody else. The rich and important live in the front section of the train, partying and eating and drinking like kings and generally living it up. The rest of the people live in the rear of the train, condemned to the kind of life that makes today's homeless look like they're living on easy street. They're fed nothing but chemically-created nutrient bars. They have little to no privacy due to overcrowding. Their kids are even sometimes taken from them for mysterious purposes. Anyone who dares to speak out against this is punished. Brutally.

And that's where our heroes come in.

Chris Evans and John Hurt play Curtis and his mentor Gilliam, respectively. They're the ostensible leaders of the people in the rear of the train, and with the help of Curtis' sidekick Edgar (Jamie Bell) and Namgoong and his daughter Yona (Kang-ho Song and Ah-sung Ko) they put together a rebellion that seriously derails (sorry, couldn't help it) the plans of the train's creator and leader Wilford, played by Ed Harris, who is almost worshipped as a god by the people in the front of the train, and his main representative Mason, played by Tilda Swinton.

So we're clear that the movie has an interesting idea, but what about everything else? The acting, as you'd expect from most of the principles in the cast list, is pretty superb, and Chris Evans is a captivating lead. His performance as Curtis is intense. I just have two complaints in the acting department: one is that Hurt and Harris don't share any screen time, which is disappointing; the other is that Swinton's character is one of the most annoying I've ever seen, and while that might be the fault of the writing or directing, Swinton plays her so absurdly that there's no menace, and as she pretty much the primary antagonist for most of the film, that's a problem. As for the rest of the writing, it's just fine, nothing special to report either way. Likewise the directing; for the most part it was solid but there were a few points where directorial decisions left me shaking my head.

As the film reaches the end of the line (again, sorry) it goes off track a little (and again!). It starts throwing twists at you left and right. There were as many as five twists by my count; some, like the one involving the early days of the train and Curtis and Edgar's relationship, are brilliant and add quite a bit to everything. Others, like the ambivalent ending, leave a lot to be desired. Still, Snowpiercer is a decent enough movie with an idea great Egmont to earn it three out of five stars.