Slasher/Comedy "Sanctuary: Quite A Conundrum" Heads to Your Home in August. 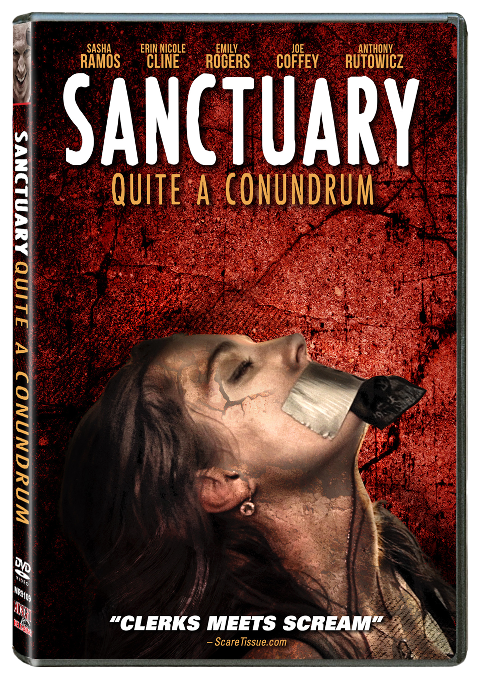 No special features were announced at this time. "Sanctuary: Quite A Conundrum" hits DVD and VOD on August 26th.

SANCTUARY: QUITE A CONUNDRUM, the indie film that took the festival circuit by storm, garnering both critical and audience acclaim, comes home when Midnight Releasing, the leading purveyor in home entertainment horror, releases the thriller August 26th on DVD, VOD and digital download. With a fresh, hot young cast and a story that defies description (we’ll try, though), the winner of numerous festival honors will be available throughout North America via multiple platforms. DVD availability is set to include Walmart and most other retail and rental chains. On the digital side, the film will be available on all major and minor cable VOD channels as well as major internet platforms including iTunes, Amazon Instant, Vudu, Google Play, Xbox Video, Sony Entertainment Network, and others. SRP for the DVD is $14.98, with DVD pre-book on July 15th.

The directorial debut of Thomas L. Phillips, who also wrote, edited and produced the film, SANCTUARY: QUITE A CONUNDRUM paints an unforgettable and truly bizarre picture of suburbia – with a brush dipped in blood! BFFs Mimi (Sasha Ramos) and Tabitha (Erin Nicole Cline) are holding a party at Mimi’s house while her father is away on business. Inviting boyfriends Dutch (Joe Coffey) and Sean (Chris Greene), Mimi even allows her younger sister Kylene (Emily Rogers) to invite her boyfriend Harris (Anthony Rutowicz).

What starts as a typical pool party soon turns violent when neighbor Mark (John Lucas) shows up unannounced – completely naked and brandishing a gun. Forcing Mimi to admit to their failed tryst, Mark turns the gun on himself and falls dead into the pool. From that flash point starts a nightmarish odyssey for everyone involved. Soon, secrets will be divulged, alliances will shift and friendships will be tested. As the evening wears on, it becomes apparent that someone within their group might have tasted blood before...

Critics have chimed in their approval of SANCTUARY as well. A Bucket of Corn declared “it will forever leave a mark on your mind,” while waytooindie.com called the film “appalling, brash and untamed.”
at 12:55 PM
Labels: "Sanctuary: Quite A Conundrum", DVD News, Midnight Releasing, VOD News