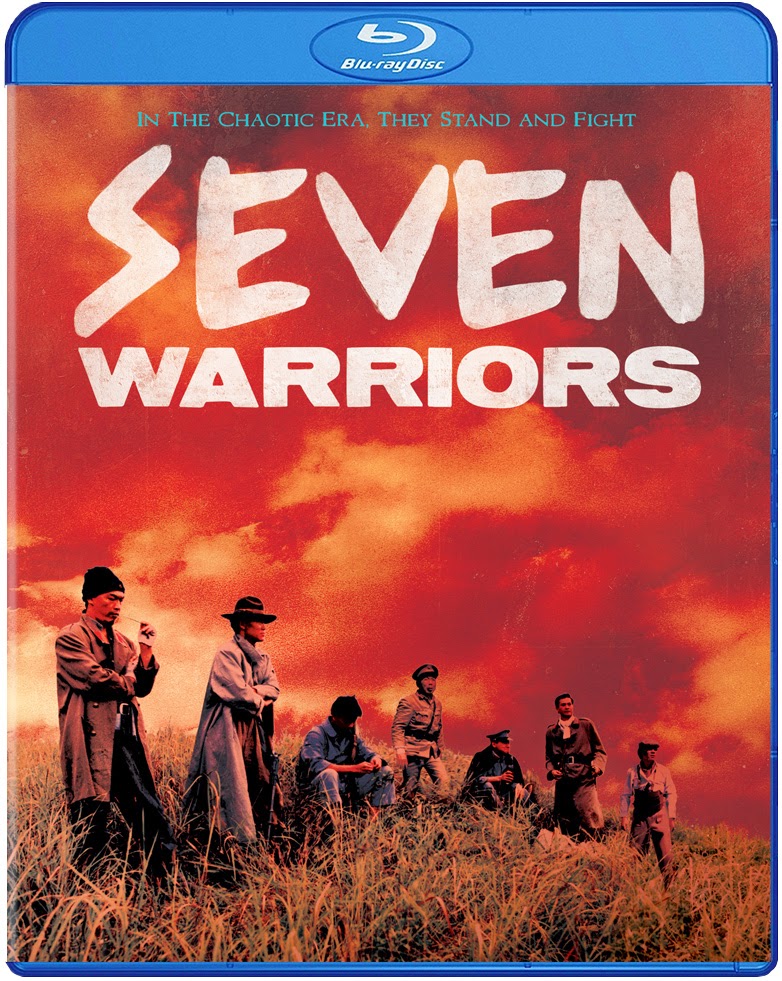 Plot: The Warlord Era: where desperate soldiers have become thieves and bandits, leaving towns and lives in ruins. The villagers of Guangxi rise up, hiring seven warriors to take up arms against the marauders and save their home.

This is the 1989 old school martial arts and gun fighting, wild and crazy over the top popcorn flick. This was during the days of clanging swords and when you Kung-Fu someone it seemed to make noises. This is a fun film that has a message to it. A village is being bullied by ruthless thugs. The village has a meeting to find people that is willing to help them fight and to defeat the thugs. From brutal gun fights to fun choreographed fighting only a Hong Kong film can do.

This is happily released on Blu-ray in all its wonderful fighting glory of survival and the will to defeat the bad guys. The film is crisp and vibrant with color and sound likes it’s never been seen before. A beautiful restoration of a classic 80’s martial arts film. I think more swords and guns are used in this then anything. This is a violent film. There is a lot of death and bloodshed and brutal violence to the innocent.

Directed by a two person team the one of a kind martial arts legend Sammo Hung Kam-Bo and his partner Terry Tong. I grew up watching Sammo. A master martial artist and a true legend in the world of martial art films. An amazing stunt man and director. He crafted many greats and will always be remembered by me from my childhood watching afternoon action blocks or double feature kung-Fu cinema. Sammo even has a small part in this film at the start.

Now this film was made to play homage to the legendary masterpiece Akira’s Seven Samurai. Now this clearly has no competition to that masterpiece, but, it’s still a fun film with a mix of slap stick comedy and very violent show downs.

This stars many legends in the martial arts film world. Adam Cheng who started acting in the 1970’s in television and went on to star in many martial art films in the 80’s and 90’s and even today. This also stars Jacky Cheung who is an actor and singer selling over 20 million records. He has acted in many films of the 80’s and 90’s and even today. He is an iconic pop star and legend in his country. Now this also stars the Shaw Brothers legend Max Mok. Best known for starring in Once Upon a Time in China 2,3,4,5. Now this also stars a personal favorite actor of mine Tony Leung Chiu-Wai. He has stared in some of the greatest films of all time. He is a stable of Wong Kar Wai films such as the masterpiece In the Mood for Love and also 2046 which is just a few of his legendary roles. Now I would have to say his ultimate role in any film was John Woo’s 1992 action masterpiece Hard Boiled alongside Chow Yun-Fat. He is a wonderful talented man that owns any part and creates many amazing characters in his career. He has also won many awards for his acting ability through many award organizations. To look at his career from In the Mood for Love, Hard Boiled, Internal Affairs, 2002’s amazing film Hero, is just plain awesome for the movie viewer to experience his wonderful performances. I just absolutely love him as a performer and he is a golden rock star of cinema.

Seven Warriors is a film that has received cult status in the fan base world of cinema. A great action packed film that leaves a message. Brutal bad guys that lack any care of human life. From rapping to killing, to stealing and controlling the innocent farmers and village people. Destroying their ways of life which creates the buildup of this movie. You the viewer get to see the innocent stand up and fight against the controllers.

A great classic film that I highly recommend for fans of this style of cinema. It was a truly magical watch seeing it beautifully done on Blu-ray. Well Go USA Entertainment did a fantastic job releasing it. I hoped for special features but sadly none which is a letdown but with that said it’s still a wonderful film to be seen.