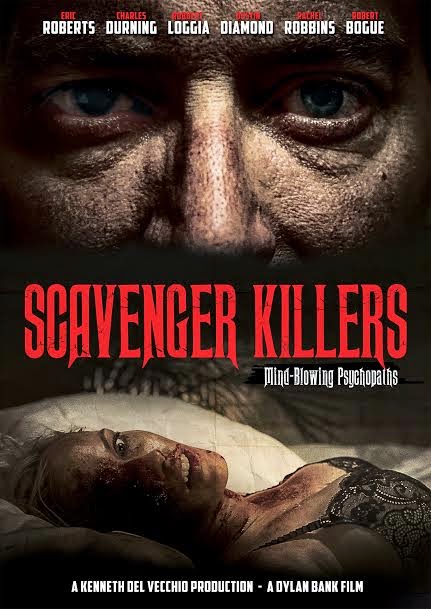 Plot: 'Bonnie and Clyde' are reinvented in SCAVENGER KILLERS, where a charming judge and a hot criminal defense attorney go on a maniacal, random killing rampage. With bizarre, yet somehow believable, FBI agents on the hunt, the deranged duo amp up their rampage, never murdering with the same method but always with same untamed ferocity.

To start with I really had a super hard time writing this review and most of all getting through the movie. Usually I can pop a review out easily but this one was a pain because it’s truly a film that only a few will enjoy or take to its odd silly premise. It tried too hard and because of that it failed miserable. As you can see I am not a fan of this film.

Well this is clearly a gory low-budget B-movie. Wild over the top violence and bloody mayhem. A simple wild twisted over the top horror film. This is not for everyone. It's geared toward the lover of low budget drive-in fodder. Simple, silly and outrageously dorky with bad acting and a trippy horror induced reality.

A Law Judge and a Defense Attorney are sadistic crazy sex grazed and deviant serial killers. Add in a psychic who can see a person’s thoughts by touching there boobs and all the make-up, buckets of blood and you have this crazy piece of cinema.

The cast is wild. You have tons of character actors and b-movie stables such as Eric Roberts, the legendary Robert Loggia and legendary Charles Durning and my god Screech from Saved by the Bell.

This is either ridiculously good in the low-budget Roger Corman type setting or it's ridiculously horrible. I guess it's all up to the viewer and what they think of this movie. I for one laughed at times yet was massively bored. The acting is horrendous. The plot is all over the place. The gore is just for shock value. The movie is what it is, a b-movie that some will like and some will loath. I feel the loathing will out way the liking.

So the judge and his woman basically go on a rampage killing for the fun of it, causing massive slaughter and bloodshed in all the gory wonderful ways of a twisted horror style film of pure carnage. This is not about great acting, or interesting plot or even direction, what it's about is nothing more than bloodshed and that’s where it's geared toward the fan of these style of films.

The audio and video are fine. You can hear crystal-clear and the imagery is colorful and beautiful, so there's nothing wrong in the department of audio or video.

I think the extras are actually better than the film.

Behind the (CRAZY) Scenes,

How to get killed in a really gory horror movie,

If you're into really bad acting, tons of senseless gore, don't get me wrong I love gory movies, but like I say, this was done poorly in the acting and direction and plot. Throwing buckets of blood and brains and killing and stuff like that into the mix to better your picture; well it fails horribly in this case.

I'm sure there are fans out there that will enjoy this film. I for one laughed a little bit but it got old, boring and senseless and I just wanted it to end.