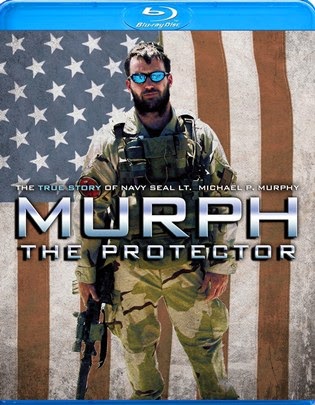 'MURPH: THE PROTECTOR': Two and a Half Stars (Out of Five)

A documentary about the life of LT Michael P. Murphy; a Navy SEAL who lost his life, in 2005, fighting Taliban soldiers in the Hindu-Kush mountains (the incident was the basis for the popular 2013 war film 'LONE SURVIVOR'). This documentary was written and directed by Scott Mactavish, who also directed another documentary on American troops (in 2008) called 'GOD AND COUNTRY: UNTOLD STORIES OF THE AMERICAN MILITARY'. This movie features archive video (and pictures) of Murphy, as his family and friends tell stories about him. I found it to be a very nice and inspiring film; not great filmmaking (in any way) but a nice tribute to someone who appears to have been a great modern hero.

The documentary begins with Michael's parents (Maureen and Daniel), and other family and friends, telling of Michael's past; growing up in Patchogue, New York. Michael was called 'Murph' by his friends and known as 'The Protector'; for defending people that were often attacked or picked on (like a special needs student in 8th grade). He went to Penn State and graduated (in 1998) with degrees in political science and psychology. He joined the Navy SEALs after college and went to War in Afghanistan. He eventually became the leader of a four-man SEAL reconnaissance team (in an assignment called 'Operation Red Wings'). They were surrounded by Taliban troops on June 28th, 2005, when Murphy was killed. Michael posthumously earned the Medal of Honor in 2007.

Like I said, the movie is a great tribute to someone who appeared to be a great man. As a film it's not really that interesting or compelling; it's basically just a lot of Murphy's friends and family telling stories about him and saying what a good guy he was. That's really nice for people that knew him but for people that never met the guy it doesn't really tell us that much about who he really was. The director can definitely use a lot more experience in filmmaking (and a bigger budget). It's also odd that Michael's buddy (and fellow Navy SEAL), Marcus Luttrell, isn't interviewed in the movie. Luttrell was the 'lone survivor' of Operation Red Wings and is the only guy that really knows what truly happened to Murphy. I know Luttrell was busy making 'LONE SURVIVOR' (as a technical advisor) but you'd think he could have found time to help out with this movie too. I think this documentary would have been much more fitting as a special feature on a 'LONE SURVIVOR' DVD (rather than it's own feature) but it is a decent tribute, all the same.
at 6:26 PM
Labels: Anchor Bay Films, Documentary, Murph: The Protector, Reviews