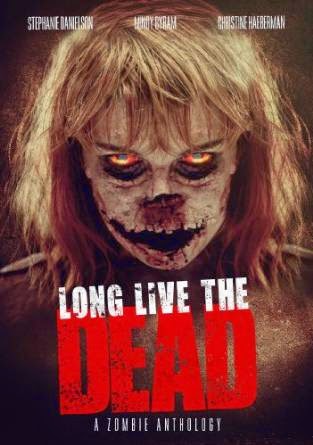 "Long live the dead." While as a big fan of the zombie genre I certainly agree with the sentiment, if a condition of my undeath meant I'd have to watch this movie, I'd jump right back into my coffin and ask a friend to kindly cover my grave over with dirt again. This movie is just that bad. It's a low-budget indy flick and I'm usually pretty merciful on those, but this one brings whole new levels to the "low" in "low-budget."

It's an anthology. I'm an avid book reviewer as well as a movie reviewer, and I always say an anthology is the trickiest thing in the world to review because of the varying content and qualities of the stories. Well folks, this five-story anthology puts the lie to that theory; every single one of the entries here is just plain awful. While there are a total of six different writers credited (Odie Bracy, Matthew Ryan Fischer, Jeandre Garber, Daniel Koczy, Vicky L. Neal, and Richard Poche), there's only one director for all the shorts (the aforementioned Mr. Poche), so I can only assume he should get the lion's share of the blame, but it's hard to tell with so much awful flying around.

The first story, "Dweezle," plays out like an even more annoying version of "What if The Simple Life met the zombie apocalypse," with Mindy Byram and Erica Rhodes playing Josie and Robin, cattier, more annoying versions of Paris and Nichole. They tell ghost stories and pick on each other and put on a clinic of horrible acting until one of their boyfriends catches the zombie fever and things play out predictably, with some of the worst special effects I've ever seen. Blood splatter resembles digital Atari blood and the zombie (and all other zombies) is just a guy in a rubber mask from Party City. It looks as awful as it sounds, believe me.

The rest of the stories continue the trend of abject awfulness set by the first installment. "A Picture to Die For," starring Megan Porter and Christine Haeberman, is just as predictable and poorly acted, with characters just as awful, but is filmed in black and white in what I can only assume is an attempt to use the vintage atmosphere to distract from how bad the short is.

Needless to say, the attempt fails. I could keep going, but I'd honestly just feel like a bully at this point. While the third short, "Black Bone Woods," has an interesting twist, and the last one, "Here Lies Bud," (yeah, I'm skipping the forth entry, "Zoe Dies in the End," because it's wholly unremarkable) has a fairly unique setup, none of it overcomes the awful acting, writing, directing, effects, etc. Long Live the Dead gets half a star out of five just because people actually worked on putting it together so I'd feel bad giving it zero stars.
at 9:04 PM
Labels: Long Live the Dead, Reviews, Wild Eye Releasing