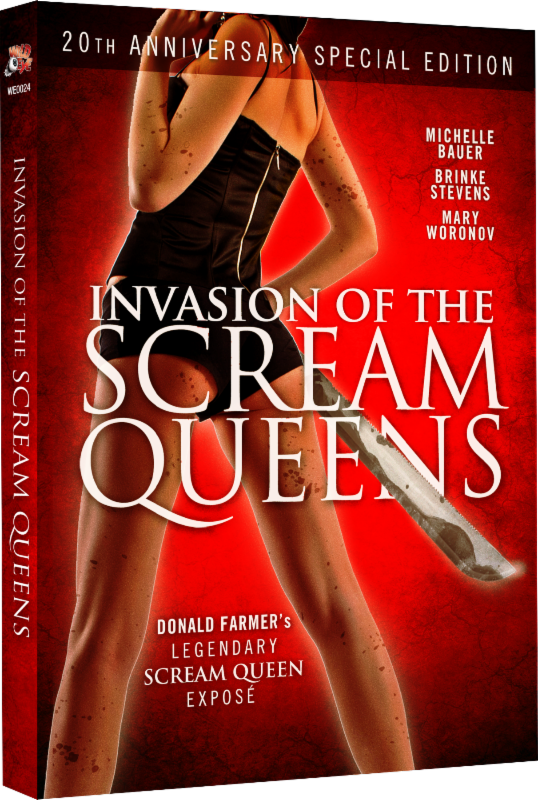 When I first heard that “Invasion of the Scream Queens”, I was very interested in seeing it because of some of the talent are in the film like Brinke Stevens, Michelle Bauer, Elizabeth Kaitan, and Mary Woronov. The other thing that drew me into this was the fact that was a nostalgic documentary on eighties b-movies, which I’ve been interested in for a couple of years now.

The film was recently released on DVD for the first time after its debut on VHS on 1992. “Invasion of the Scream Queens” in a documentary that goes into what it takes to being a scream queen. From stories of how each actress became a scream queen to the pit falls of the business, everything is talked about in this documentary. The film features interview from Brinke Stevens, Michelle Bauer, Elizabeth Kaitan, Mary Woronov, and David Decoteau.

I was hoping to really love “Invasion of the Scream Queens”, considering I like watching documentaries about this genre plus it had scream queens. Sadly, I didn’t enjoy this as much as I would’ve liked to, considering that I liked some of these actresses is this documentary.

What I liked about this film was that does a good job in covering all of these actresses’ careers. Farmer does a very good job with the way that they were interviewed. The interviews covers everything from stories of the various films that they were apart of and focus on topics about directors, nudity and business side of filmmaking. It was a nice look at each of the subject.

But this film is hampered by two things. First, the pacing of this film was awful. The reason for that was the way the film moved at a slow pace. It felt that way to me, because all of the interviews felt like little short films where the actresses will talk for a couple of minutes then you don’t see them again. It made the film drag, as it would’ve been nice if that the filmmakers focused on one topic at a time then having mini short films about each actress. Some of them felt like it went too long than it should’ve. If some of these were edited, it would’ve made the film move along. The other problem that this film is fact that some of big actresses from the era weren’t in the film. I have no problem with having some of the actresses that you haven’t heard of in the documentary. When you start noticing some big names during that time like Linnea Quigley, Lynn Lowry and Jewel Shepard to name a few not participating in this documentary. This really hurts the whole thing in a way, as there were too many unknown actresses than the big ones from that era.

Another thing in this film that might hurt your enjoyment, the grainy picture and audio. It felt like it was taken off a VHS tape, as this is the first time this film has appeared on DVD. This didn’t hurt my viewing experience but may hurt someone else that not’s familiar with the VHS days of cinema.

First thing on the DVD was a 2013 interview with the film’s director. This 67 minute featurette talks about the film and his career. The problems that I had with it was the fact he’s being interviewed at a convention and some of this could’ve been edited as it felt I was watching outtakes after the first hour. It would’ve made this a better segment. After that, there was forty-seven minutes of deleted scenes, a behind the scenes photo gallery and wraps up an excerpt from the out of print book “Invasions of the Scream Queens” book featuring Linnea Quigley.

I was surprised that I didn’t enjoy this film as much as I should’ve. I wished “Invasion of the Scream Queens” moved quicker and had more known b movie actresses during that period.