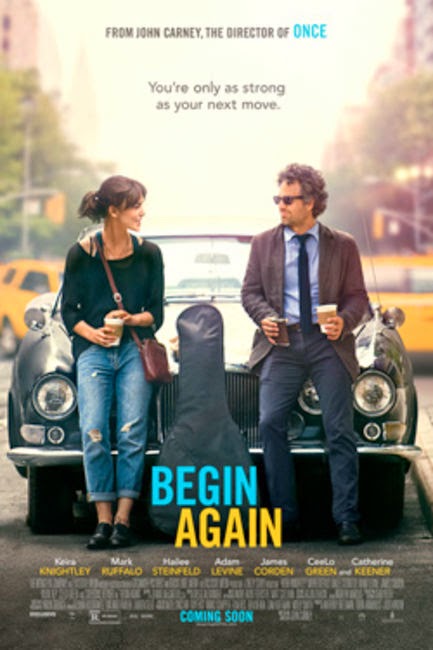 Musical romantic comedy flick written and directed by John Carney; who also wrote and directed the critically acclaimed 2007 Irish musical 'ONCE'. Mark Ruffalo and Keira Knightley star in the movie (Knightley also did all of her own singing) as an alcoholic music executive and a singer/songwriter who collaborate on a music album; they record all live over the summer (in New York City). It costars Hailee Steinfeld, Catherine Keener, James Corden, CeeLo Green, Mos Def and Adam Levine (in his film debut). I found the movie to be really entertaining and emotionally uplifting as well.

Ruffalo plays Dan Mulligan, a recently unemployed music label executive who lives in New York City. Dan is separated from his wife, Miriam (Keener), and hasn't signed a successful music artist in seven years. He also has a teenage daughter, named Violet (Steinfelf), and is an alcoholic, due to his depression. Knightley plays Gretta, a singer/songwriter who recently broke up with her longtime boyfriend, Dave (Levine). The two moved to New York because Dave was signed to a record label. He quickly let the success go to his head though and had an affair with a music label associate. Dan discovers Gretta playing one of her songs at a bar, in East Village, and immediately thinks she's the person who will help him get out of the rut he's in. The two soon decide to produce an album together.

I like 'ONCE', a lot, because I really like the music and think the movie was filmed beautifully. I like this film for the same reasons; the music is great and the film looks amazing. It's also just a cool feel-good movie. I really enjoyed it, a lot, while I was watching it. Like 'ONCE', it's not a film I'll take a lot away from but it's still a really fun time at the movies. It's also one I look forward to seeing again, like a good song that you can't wait to hear again! To me that's a good movie.
at 6:47 PM
Labels: Begin Again, Hailee Steinfeld, Keira Knightley, Mark Ruffalo, Reviews, The Weinstein Company