"Adjust Your Tracking: The Untold Story of the VHS Collector" Review - Written by Maynard M 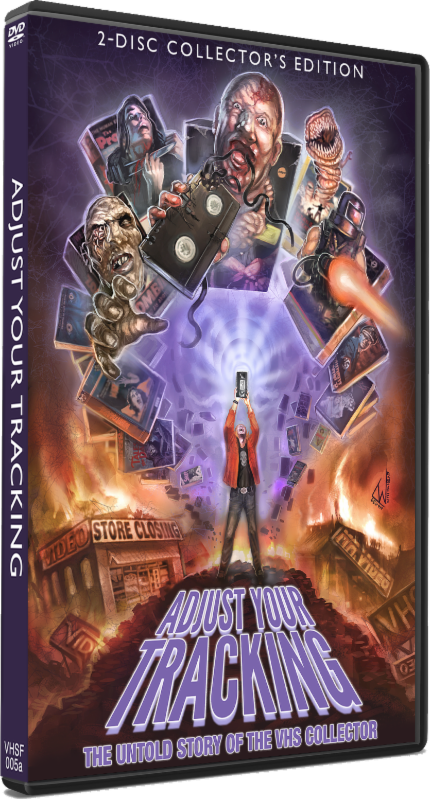 When it comes to VHS, I'm quite a philistine and I guess that every VHS collector probably hates me for this. Even though I grew up on VHS, I was one of these bastards who stopped caring about video cassettes when DVD came out. I still have a lot of tapes, but they're lying around in a cellar, gathering dust. Sue me. Shoot me. At least nowadays, I'm some kinda mini-mini-mini-rebel, refusing to go Blu, still buying lots and lots of DVDs, claiming that DVD is my Vinyl, my VHS.

*awaiting hordes of VHS collectors attacking me, beating me to death with VHS recorders*

Nevertheless, I still remember the first time I entered a rental store in 1990 which became the #1 playground of my youth. I was 8 years old. It was a rainy day, my parents just bought their very first video recorder, and right after, they went with me to this place called "Kinothek" (=Cinematheque). The glass door opens, 3-4 small steps, touchdown. Welcome to the wonderful world of VHS. Videos here, videos there, videos everywhere. Large posters showing an ugly man with a burnt face standing next to a burnt baby stroller, and a man with a metal helmet on his face. It was a surreal but deeply fascinating experience... an experience that left me flabbergasted. After quite some time of looking and watching and touching as many covers as possible, we eventually left with 3 films (yes, I still remember that): "Valhalla (1986)" for me, "Dressed to Kill" for my mother, and "Havoc 8" (car crashes galore) for my father.

The best part about the "Kinothek" was the horror section which was located in the basement where it always smelled a bit mouldy (believe it or not: I miss that smell). It was the most awesome place on the whole planet. I used to look at certain VHS covers for hours and hours and hours. I remember repeatedly looking at the awesome pics on the backs of "Metamorphosis: The Alien Factor", "Syngenor", "Mind Killer", "Night Angel" or "Anthony II (a.k.a The Cellar)". I remember having a hard time looking at the images of burning people on the covers of "Evilspeak" or "Tigerman (a.k.a The Final Alliance)". Back then I was afraid of fire and got scared when I saw stuff like that - a fear that (un)surprisingly stopped when I started smoking a few years later :-)

You may ask why I'm telling you all about this childhood stuff? Well, all these memories came back to me and fully overwhelmed me whilst watching "Adjust Your Tracking", one of the absolute best and most entertaining horror-culture-themed documentaries I've ever seen. Not even Michael Stephenson's docu-masterpieces come close to the awesomeness of this genius gem. Its only flaw is that it's only 80 minutes long. It should have been at least twice as long.

Directors Dan M. Kinem and Levi Peretic give us everything we always wanted to know about VHS, as well as everything we already know about it. We get to see many, many cool and fun hardcore VHS collectors telling us about the beginnings of VHS, its rise in the 80s, its downfall in the 90s (damn you, Blockbuster!!), the rise of DVD, the... um, "death" of VHS and its quasi-resurrection by film-maniacs who got sick of generic and ugly photoshop covers, too-perfect-looking re-masters and re-releases, as well as charmless, unattractive and somehow clinical-looking rental stores. Film-maniacs who miss the good old times of getting fooled by super-awesome VHS covers of super-shitty shot-on-shitteo crap-fests, getting amazed by the incredible-looking Big Boxes by Wizard, getting excited about entering an old-fashioned rental store and spending hours and hours browsing through all the videos.

There are people owning 15.000 or 20.000 tapes, people who prefer VHS over their girlfriends, people who constantly drive to the shittiest places (age-old video stores, yard sales etc.) just to check if there are some rare VHS gems on sale. There is a guy who re-built an entire rental store in his basement (incl. Blockbuster gumball machine and mouse-less PC), a guy who spent about 700 dollars on a copy of the ultra-obscure "Tales from the Quadead Zone", and a guy who considers his "I Puke on your Grave" and "I Spit on your Corpse" tapes as films that "(...) aren't for fun. These are for real. (...) You're not the same person you were before you watched the movie."

Also, I fully understand each and everyone of them. Ok, paying shitloads of money for some age-old crappy VHS tape might be crazy - but haven't we all bought something fucking expensive at some point in our life? The unnecessarily overpriced sports car? The beautiful but rather useless MacBook? Overexpensive tickets for a U2 concert? Well, to the VHS collector, an ultra-rare VHS tape is the same as a shiny new Porsche, a pointless computer or two hours of bloated stadium pop-rock. He buys and it makes him happy, and he doesn't care about what the others think of him.

The look of "Adjust Your Tracking" is fabulous. A bit blurry and grainy, just like an old tape. There are lots of amusing gimmicks, like the collectors' names popping up on VHS labels, or when someone talks about VHS glitches, the film itself gets glitchy too. There's tons of clips from nearly-forgotten not-really-classics like "Black Devil Doll From Hell" or "Death Row Diner", lots of cool 80s-style music, TV ads, video logos, images of old VHS stores, some of the greatest VHS collections I have ever seen, as well as guest appearances by genre-heroes like Troma-boss Lloyd Kaufman or Fred Vogel ("August Underground").

The most impressive, most remarkable, most important documentary you will see this year. A must-see for fans of horror, VHS and the good old times when everything was a bit cooler than it is nowadays.
at 7:02 PM
Labels: Adjust Your Tracking: The Untold Story of the VHS Collector, Documentary, Reviews