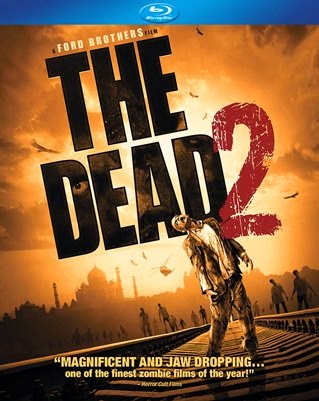 Anchor Bay Films has send us information for the upcoming release of "The Dead 2". The film is the sequel to the critically acclaimed horror film "The Dead". The film is the first international zombie film production to be shot in India. Jon and Howard J. Ford return to the director's chair for this installment.

Special features on the DVD and Blu-Ray includes The Making of The Dead 2 and deleted scenes. "The Dead 2" hits stores on September 16th.

Two years ago, filmmakers Howard J. Ford and Jon Ford took international audiences on an unforgettable journey through a zombie-infected African veldt with the critically acclaimed and audience favorite The Dead. Setting a new standard for the zombie film, the Ford Brothers have now raised the survival stakes to new dramatic heights with the September 16th Blu-ray™ and DVD release of The Dead 2.

As demonstrated with screenings at numerous international film festivals, audiences around the world have once again thrilled to the Ford Brothers’ unique vision of the zombie apocalypse, taking it to yet another epic level. And just as with the first film, reviewers are bestowing glowing praise on the filmmaker’s ability to transform an exotic environment into a vital character within the character-driven narrative. The first international zombie film production to be shot in India, The Dead 2 utilizes the spectacular vistas of Rajasthan, Delhi and Mumbai to create yet another unforgettable journey into the heart of darkness baked in sunlight. SRP for the Blu-ray™ is $29.99 and SRP for the DVD is $24.98, with pre-book on August 13th.

A ship docks fresh from Somalia which contains one infected worker that passes unnoticed into the very heart of India’s overpopulated bustling streets, setting off an unstoppable chain of events. Meanwhile, American turbine engineer Nicholas Burton (Joseph Millson, Casino Royale) is working in the stark yet tranquil Indian countryside when he receives a call from his love Ishani (Meenu), a local girl who lives on the outskirts of the slums of Mumbai and who has hidden their relationship from her tradition-minded father. She reveals she is now pregnant and scared for her life as chaos and terror have taken ahold of the cities as the dead return to life and attack the living. Nicholas has to battle his way across their 300 mile landscape filled with flesh-eating – and infectious – undead. With the help of young street kid Javed (Anand Goyal), he has to rely on his wits and sheer brute force to try and save them all, as the clock ticks off the minutes before the last flight out of a living hell...

Bonus features on The Dead 2 Blu-ray™ and DVD include The Making of The Dead 2 and deleted scenes.

Unfolding across an epic vista of breathtaking scope, thrilling action, death-defying stunts and spine-chilling fright, yet always keeping the emotional resonance in focus, The Ford Brothers’ The Dead 2 once again melds the terror of the end of the world, with the inspiration of the human drive to survive.
at 8:18 PM
Labels: Anchor Bay Films, DVD/Blu-Ray News, The Dead 2