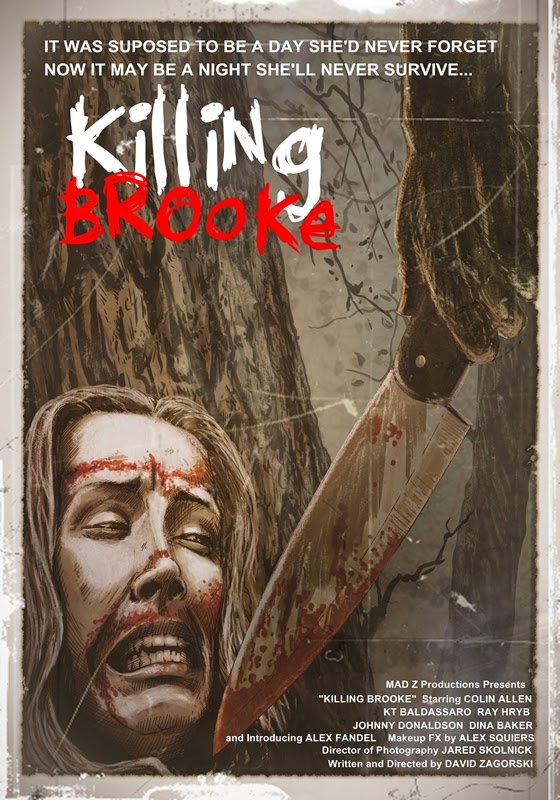 I recently attended Terror Con this past weekend in Providence, RI and one of the things that I always do when going to conventions of this nature is to seek out what production companies are there and what films can I be sold on. One of the first production company booth that I came upon was Mad Z Productions, a company out of East Hampton, Mass. I was intrigued by their releases at their booth including “Killing Brooke”, the film that’s being reviewed here.

The film follows Brooke (Alex Fendel), a free spirit party goer who’s married her lover Chloe (Dina Baker) and are on their honeymoon. They come across Vance (Colin Allen), a mysterious drifter that they meet at a bar and spend a night of drunken debauchery. This leads everyone involved down the road to terror, as it will push Brooke to limits physically and mentally as she struggles to survive.

Going into this film, I didn’t know what to expect. I thought, this was going to be one of ultra-low budget films that I was going to forget about it after watching it. The packaging of the DVD wasn’t that great plus I was going into film virtually cold. To my surprise, “Killing Brooke” was actually well worth my time and money. One of the things that made this film good was the directing. Writer/director David Zargorski does a very good job with the way that he handles his direction. He does a good job making sure that the scares have an impact. Whether it’s the way he uses the gore effects to his ability to make sure the action on screen had a suspense feel, those scenes helped made the film come off as intense and shocking especially in last third of the film. The other that Zargorski does very well was to get his cast to make their characters and entertaining and mostly frightening. He’s able to the performances that he needs to make this film work. The cast did a great job making their characters feel like characters that you would normally see in this genre, than what you’re accustomed to with some of these releases. It really helped made this film feel serious than the normal ultra-low-budget films that you see put out there at these conventions.

The other thing that makes this film work was its screenplay. Zargorski does a good job with the way he creates the film’s story. I liked how, he started the story off as a typical cat and mouse serial killer film then turns into a “Texas Chainsaw Massacre” like story with some gory moments. This works very well, as it helps made the story and action better as the film went on. It also gave the story its intense and shocking feel. Zargorski also does a good job making sure the action matches the film’s story and tone. Whether it’s the horrific stuff that takes place during the film to how the villains were created, they had a creative and shocking quality to them. It helped made the horror aspects work so well in the screenwriting process.

“Killing Brooke” is one of those rare ultra- low budget films that works on all levels. Whether it’s David Zargorski’s direction or the performances in the film, it made this film entertaining.

For more information on this film, you can visit the film’s official Facebook page at: https://www.facebook.com/pages/Killing-Brooke/111296375591064