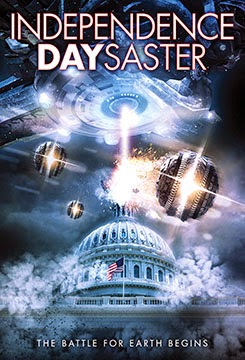 Plot: When Earth is attacked by a hostile alien force, a small town firefighter and a rogue SETI scientist team up to activate the only technology capable of defeating the invaders.

Here we go into the world of action, sci-fi b-movie bliss. A true simple drive-in class science-fiction film that plays on the wild interest of alien invasion. This is your basic style of film you would see on the Sy-Fy channel movie of the week. This changes a little in that it adds some really good actors. The actors are able to hold the audience with their acting persona or at least the cheesy situations they are given to act with. A cheesy low-budget TV film pieced together with animated special effects that clearly seemed to be made from a personal computer.

When you go into this movie you can't take it serious. This is clearly a film with no budget or at least the budget was blown on the animation. This film is created with surprisingly lack of special-effects or better yet lack of actions. Basically this has a bunch of people talking or watching or fleeing or staring at computers or talking on phones or screaming you get my point.

The plot has been done a 1000 times before and much better. This film is really weird and different for it's supposed to be an alien invasion film yet where is the invasion you ask yourself at times.

The town of Moose Ridge is about to be invaded. From the ground and from the sky, the aliens show no mercy. Explosions, drilling earthquake causing alien machines. Washington D.C. Is burning.

Directed by W.D. Hogan who has directed some truly iconic cheesy b-films. He is responsible for the ultra over the top sci-fi horror Behemoth (2011) and sci-fi Earths Final Hours (2011). His true art form comes from his talent and master art skills at storyboard artwork. He has worked on some of the big-budget films of cinema. He graced his art in Mortal Kombat, Jerry McGuire, Shadow of the Vampire, Orphan, Devil, Riddick and many, many others. He has a talent at crafting a film in storyboard but behind the camera it turns into something different.

If you're into B-movies, cheesy direct to video no plot movies, soap opera melodramatic overtones and sitting at a computer talking about what's happening then this movie is a golden ticket for you.

This is an interesting trip of b-grade science fiction. Massive animated CGI. Over the top moments that will make you laugh or cry in that it hasn't ended yet. Now reviewing this as a lover of B-movies then this will shine. All the wrongs and flaws in this movie gives it all the more glory to the film for lovers of simple silly realities. This is geared toward fans of direct to video b-grade cinema lovers. This has Drive-in late night double bill written all over it.

This stars Casey Dubois who plays Nick. Nick is the class clown type. The comical one. Conspiracy nut and the one that thinks it’s cool. Also starring Iain Belcher as Todd. Iain is the computer nut Farm Boy who is a geek that leaves in his barn with a massive computer setup. The very beautiful Andrea Brooks as Eliza. Eliza is the homegrown small town girl. The President’s son Andrew played by Keenan Tracey. His character at first is the basic slick Rick who likes hitting on the girls and also Eliza.

Also starring the very striking Ryan Merriman as Pete. Pete is a fireman and brother to the President and Uncle to Andrew. He finds himself called upon to save the day from Alien Invasion or at least protect those innocent one’s involved in the horrible invasion. Ryan Merriman is in reality a young veteran of the acting world starring in over 40 TV and feature films already in his young life. I will always personally remember him in the long running television series The Pretender, where he played young Jarod in over 50 episodes. Pretender was one of my favorite shows of the 90's and Ryan was a pivotal character. His most recent ongoing acting was in the TV show Pretty Little Liars as the part of Ian. He always is a fantastic actor and owns the parts in feature films from The Deep End of the Ocean, Final Destination 3, Ring 2 and many others and countless television.

Also starring the one and only Tom Everett Scott as The President. “Stop” “Pause”, now here we go are you ready it’s “The Wonders”: “Cause I try and try to forget you girl, But it's just so hard to do, Every time you do that thing you do, That Thing you Do.” Scott has acted in many films and TV and is always a fun example of a gifted actor that plays many different type of roles in his many years at acting. He plays the wonderful cheesy young President who has a Vice President that thinks he has no Nards and basically, can’t do anything.

But wait, but wait, the President is alive and soon he finds a farm boy named Todd. Not just any farm boy but a computer whiz. Soon all kinds of subplots happen. The aliens have taken out all communications and so the President must get in contact and that of course is why he uses the Farm boy who happens to be the computer geek. It all seems to come together amazingly cheesy. The beauty of this b-film is like taking Oatmeal and just watching it cook for entertainment.

Soon you are introduced to Celia who works for SETI who just happens to be in Moose Ridge. She joins up with Pete and his fire truck and boyish good looks to help survivors in Moose Ridge. She has sought and worked her computer geek eyes at SETI seeking contact with aliens to prove they exist and now she is at the front of the knowledge and smack dab inside the mayhem.

Pete who is the President’s brother. Fire Fighter and soon to be small town hero. He is shocked and devastated by the actions of the metal alien ships destroying everything he knows.

After the attack starts Andrew and Eliza and Nick are driven by the Secret Service, but soon the suits are taken out and the teenagers are stranded amongst the carnage. The Vice President is eager to take control. Played by the character actor Garwin Sanford. He has acted for many years in over 100 projects. He is that character actor you don’t know by name but when you see him, you know him. He plays the Vice President kind of like a prick. Soon we realize the rest of the worlds key spots have been taken out. Well America prevail? Will the pride of the RED WHITE AND BLUE survive another day? Or will this July 4th be the end of a great nation of FREEDOM? (Enter the dynamic close up and loud score of frightening music)

A pure TV Sy-Fy drive-in cheesy film worthy of lovers that are drunk or trying get their kids a sleep. I on the other hand place this in the category of a double-bill feature at the drive-in. The first film was always the top earner and the second was always the lower budget type. I laughed, I oohed (not really) but still felt this movie with the b-movie lover inside me. If you like cheesy b-films then this works for that reality.

Review Rating: One Star out of Five (2 if your a b-movie lover)
at 4:07 PM
Labels: Anchor Bay Films, Independence Daysaster, Reviews