"Grave Halloween" Set to Scare Up This Halloween Season 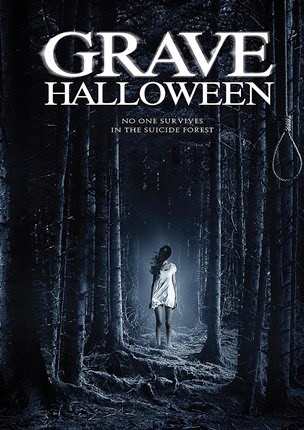 No special features were announced for this release. "Grave Halloween" hits DVD on September 30th.

In Japan, on the northwest base of Mount Fuji, lies a patch of dense forest roughly 21 miles square. Called Aokigahara, or the “Sea of Trees,” it’s also known as the “Suicide Forest.” For one woman desperate to resolve a loved one’s death, it will become a battlefield for her very soul...

On September 30th, Anchor Bay Entertainment presents Grave Halloween on DVD. Directed by Steven R. Monroe (2010’s I Spit On Your Grave) and produced by John Prince (Metal Shifters, 12 Disasters, Collision Earth), Grave Halloween terrified viewers during its premiere last year as part of Syfy’s 31 Days of Halloween celebration. SRP is $19.98 for the DVD, and pre-book is August 27th.

In the film, Kaitlyn Leeb (Wrong Turn 4, Total Recall) stars as Maiko, a college student whose mother, years earlier, took her own life in the infamous “Suicide Forest.” Now leading a student documentary film crew, Maiko hopes to shed light not only on this infamous cultural landmark, but also bring some closure to her own inner demons sprung from her tragic past. Soon the entire group realizes that their hunt for the truth is now coming after them, in a fight for survival against those who may have died in the Suicide Forest, but never left it.

Co-starring Cassi Thomson (“Big Love,” “Switched At Birth”), Graham Wardle (“The X Files,” “Heartland”), and Hiro Kanagawa (“Caprica,” “Smallville”), Grave Halloween leads viewers on a harrowing journey into a nether world where a forest can become a graveyard, and the dead can tip the scales between salvation and damnation!
at 6:37 PM
Labels: Anchor Bay Entertainment, DVD News, Grave Halloween