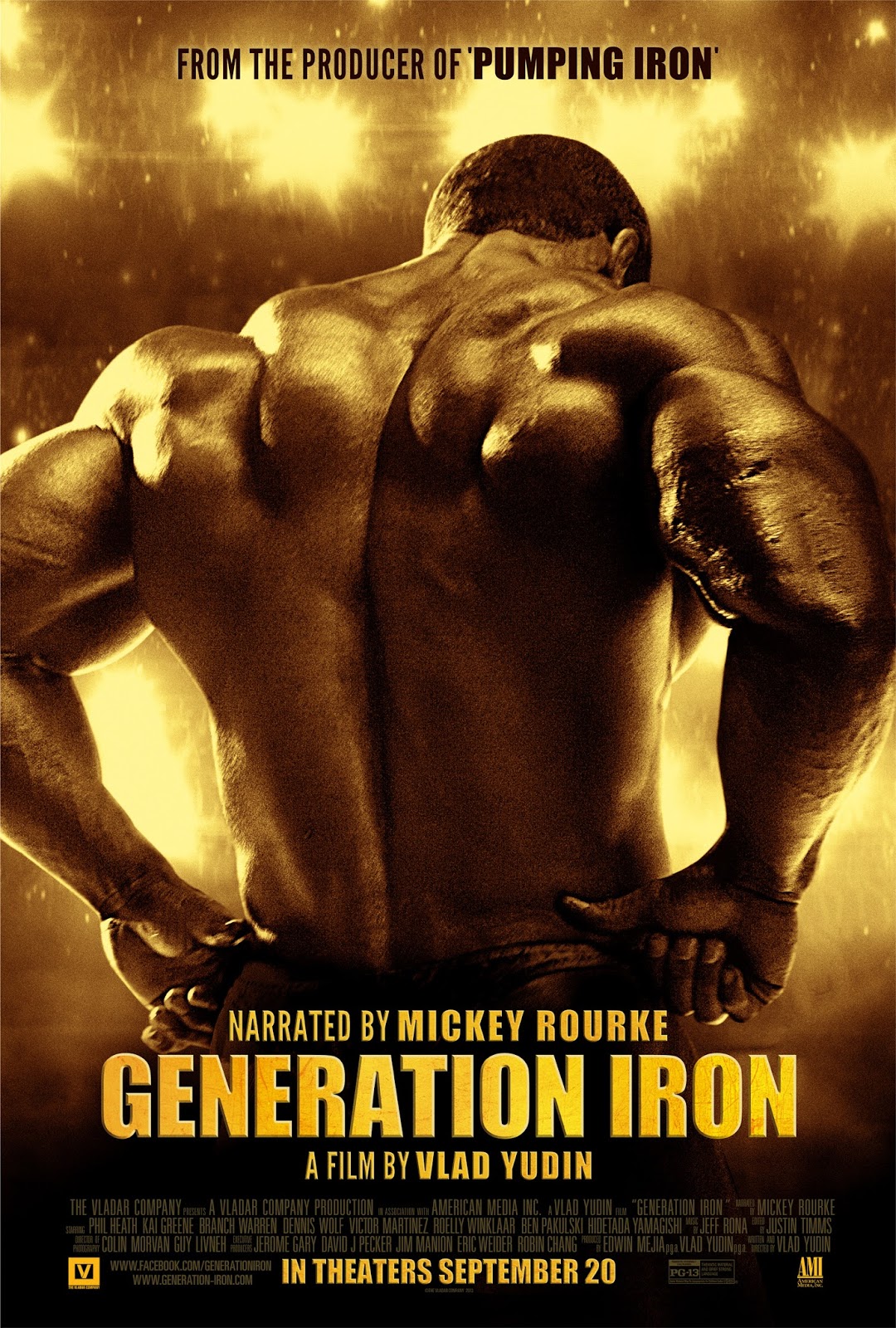 Plot: A documentary that follows top bodybuilders as they train to compete in the Mr. Olympia competition.

This is a wonderful documentary brought out in 2013. This follows a bunch of world-class bodybuilders as they train and compete for the award of Mr. Olympia. It's a different documentary because it gives you their life. It follows along with them in their daily routine. You have seven bodybuilders as the main focus. You get to see them compete and go about the struggle and the pain of the sport. This is narrated by the one and only Academy award winner Mickey Rourke. Rourke is a wonderful example and prime master of acting that finally got his just do with the modern classic The Wrestler. He pumped up for this role in the Wrestler and so it shows a person that understands the struggle of lifting weights and changing oneself.

Also this has a special appearance by the one and only Pumping Iron bad ass Arnold Schwarzenegger and a personal favorite of mine Lou Ferrigno. Mr. the Incredible Hulk, "you wouldn't like me when am angry".

This is actually flawlessly directed and is a great subject for a documentary. I enjoyed watching the seven individuals go about their training and the completion for 2013 Mr. Olympia.

Vlad Yudin did a fantastic job in creating this film. He gave it his all in showcasing the wonderful world of bodybuilders and the struggle they go to for their sport. He showcased this artistic world of body forming. A modern day Gladiator sport of structuring the best body. In this film the bodybuilders can show the world the best of their bodies.

Not since the flawless documentary Pumping Iron has there been a true iconic documentary about this unique world of weights that stood up next to Pumping Iron. Generation Iron has succeeded in meeting the standard of that classic documentary. This is Pumping Iron for the modern generation. The art and mastery of the sport of lifting weights is showcased beautifully.

I think this is a flawlessly done documentary. It's very stunning and actually beautiful in the sense of showcasing a sport that is basically often overlooked but is a challenging and very competitive and largely a force of inner soul to achieve a goal and to better oneself through discipline.

On the DVD you get Special Features Generation Iron: Behind the Scenes. Also an Extended Interview with the one and only master Lou Ferrigno. Also you get Deleted Scenes. Loved the special features which was just a bonus and a plus for the viewer.

Arnold held the title Mr. Olympia for seven consecutive years. Ronnie Coleman held it for eight consecutive years. And now the new comer Phil Heath "The Gift" is a main focus who was the current holder of the title Mr. Olympia as this was being filmed. You then are introduced to those who are competing for the title. Phil is structurally sound in body form. He has the whole package. He is solid, tight and thick in pure muscle.

Kai Greene "The Predator" is one massive brick wall of amazing structure. He is going for the title and his persona and mind set showcases his want of the title. He also draws and is a performance artist. Listening to his past and his demons is a dramatic and truly thought provoking reality. It shows his example of his life struggle and his passion to follow the art of bodybuilding. His experience is away of knowing oneself and the inner soul to showcase the pain and struggle and triumph in his life. His will and his therapy of weights gave him a new life. On a side note he paints and draws amazing.

Branch Warren "Quadrasaurus" is a stunning form of bodybuilding. He looks and fits the part. His body is a concrete form of art displayed with sweat and struggle and an iconic look of Gladiator. Love his philosophy. No one owes you a dam thing, you have to work for what you want. He clearly has worked. Another amazing example about him is he brought himself out of an injury and pushed forward toward his goal of the title.

Ben Pakulski "Pak-Man" is a fat burning weight lifting powerhouse of dominance. He crafts his art with not only weight lifting but also through a technological understanding. He follows and studies the science of the body. He maps and traces his fat burning and weight gaining through computers.

Roelly Winklaar "The Beast". Beast he is. A structure of pure muscle and unflinching body art. Trained by the bodybuilding industry's Sibil Peeters known as Grandma. One of the toughest trainers in the sport. Winklaar is a stunning mass of muscle that is pure Gladiator and a heart that seeks the ultimate goal.

Hidetada Yamagishi " The Dragon" is body perfection. He shines with the art and sport complete with top to bottom solid muscle that seems to shine and structures itself upon his body as he flexes and tones and showcases the beauty and work of his form on stage.

Victor Martinez "The Dominican Dominator" is muscled brilliance. He has been on top at times and yet fallen into demons at times. His struggle of personal experience pushes him to secede further and further at the dream and title. I feel he has one of the more touching stories because of the personal demons. Never seems to get a break, always something happening from jail, to a family member being murdered and so on. Just a true reality eye opener at his pain and somewhat damaged life.

Dennis Wolf "The Big Bad Wolf" he is and bleeds the term Goliath. His toned and muscled body gives off the pure persona of warrior perfection. He is a German powerhouse of muscle. He is huge.

The beauty in the art-form of lifting weights is showcased and brilliantly structured in this documentary. It's a deeper subject matter. It's not just about guys lifting weights, it's about personal demons, personal struggles and problems. This is in a deeper reality then Pumping Iron. This shows the realities, support, family life, past demons. People don't realize the passion and the force that these individuals put up on their bodies to get the greatest pose and structured mass. This gives the brilliance that they are seeking and the understanding and science behind the sport.

I think one of the most appealing moments of the documentary is the subject of Steroids and how they talk about it and yes it's used but there is also an art form to it in using it right and in a wrong way. Other reality is the certain moments that happen that shock you such as the Horse incident.

I think this documentary opened my eyes more than any other weightlifting film. I think it's better focused, better structured in showcasing personal struggles and the reality of the sport and how tough it is. I have a new outlook on these men and a new understanding and also a new emotional attachment to the art of body structure.