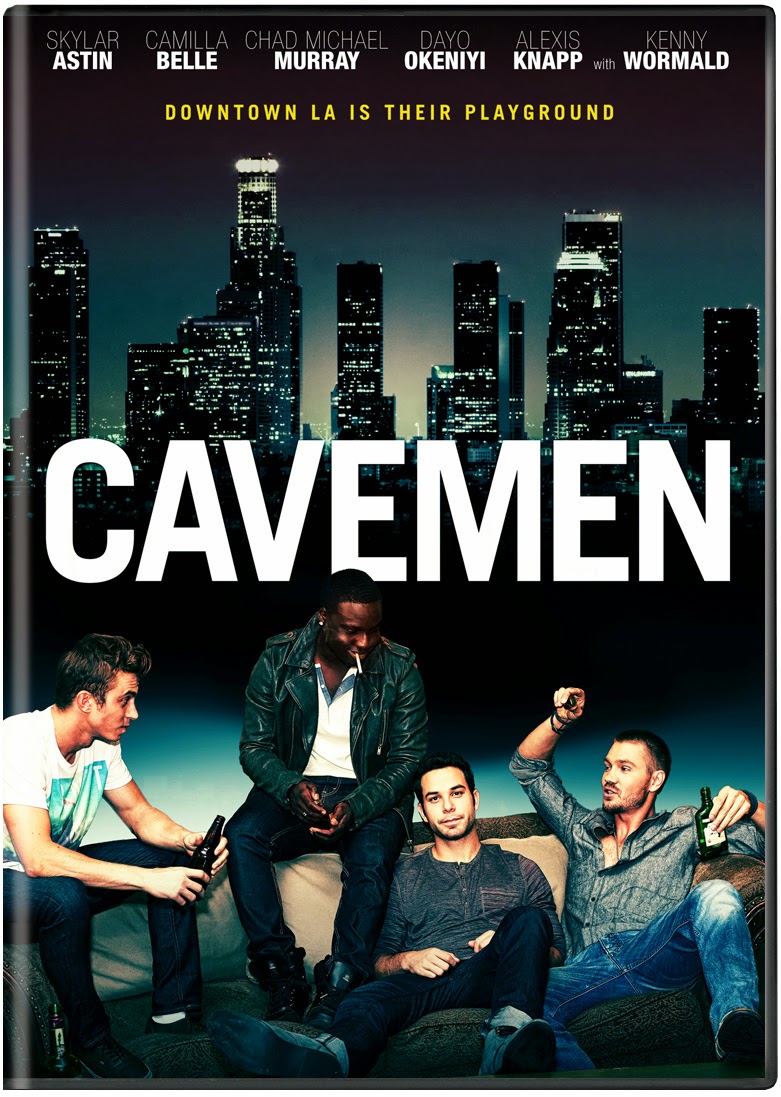 'CAVEMEN': Two and a Half Stars (Out of Five)

Sex comedy flick about a group of mostly unemployed bachelors, living happily together in an LA warehouse, when one decides he wants to give up his sex filled carefree life in order to pursue love.  It was written and directed by first time filmmaker Herschel Faber and stars Skylar Astin, Camilla Belle, Chad Michael Murray, Alexis Knapp, Dayo Okeniyi and Kenny Wormald. The cast is full of a lot of recognizable faces, with little name value though; Astin costarred in 'PITCH PERFECT' and '21 & OVER', Murray had major roles on the TV show 'ONE TREE HILL' and in the horror remake 'HOUSE OF WAX', Belle has appeared in indie movies like 'THE BALLAD OF JACK AND ROSE' and big budget bombs like '10,000 BC' and 'PUSH', Okeniyi was in 'THE HUNGER GAMES' and 'THE SPECTACULAR NOW', Wormald starred in the 'FOOTLOOSE' remake and Knapp also appeared in 'PITCH PERFECT' as well as 'PROJECT X'.  There's definitely a lot of up-and-coming young actors (with pretty faces) but the movie still goes nowhere.

Astin stars as Dean, a bartender who's struggling to become a film writer. He lives in a warehouse, turned into a bachelor pad, with his jobless buddies: Jay (Murray), Andre (Okeniyi) and Pete (Wormald). Pete is the only one of the group with a girlfriend, Beth (Amanda Jane Cooper), but they're constantly breaking up. Dean is trying to write a screenplay about love so he's recently became fascinated with the idea of it (for himself). He constantly asks advice from his best friend, and coworker, Tess (Belle); who he also has feeling for. His idea of looking for love of course does not go over well with any of his guy friends.

For a low budget sex comedy film, that I had never heard of before, I was surprised by it's production values. The directing isn't bad and it has a pretty good soundtrack (there's also a couple nice tit shots as well). The acting isn't bad either and most of the cast makes likeable characters (at least somewhat). There's just not much to the story, or the film. It feels like something you've seen dozens of times before and you'll never remember anything about it (once you've seen a few more movies just like it). With that said some of the film is funny, thanks largely to Astin (and some of the other actors), and it's definitely not a cringeworthy or painful film going experience. You might have a good enough time, for the 87 minutes it takes to watch it, but don't expect anything more than that.
at 10:11 PM
Labels: Cavemen, Reviews, Well Go USA