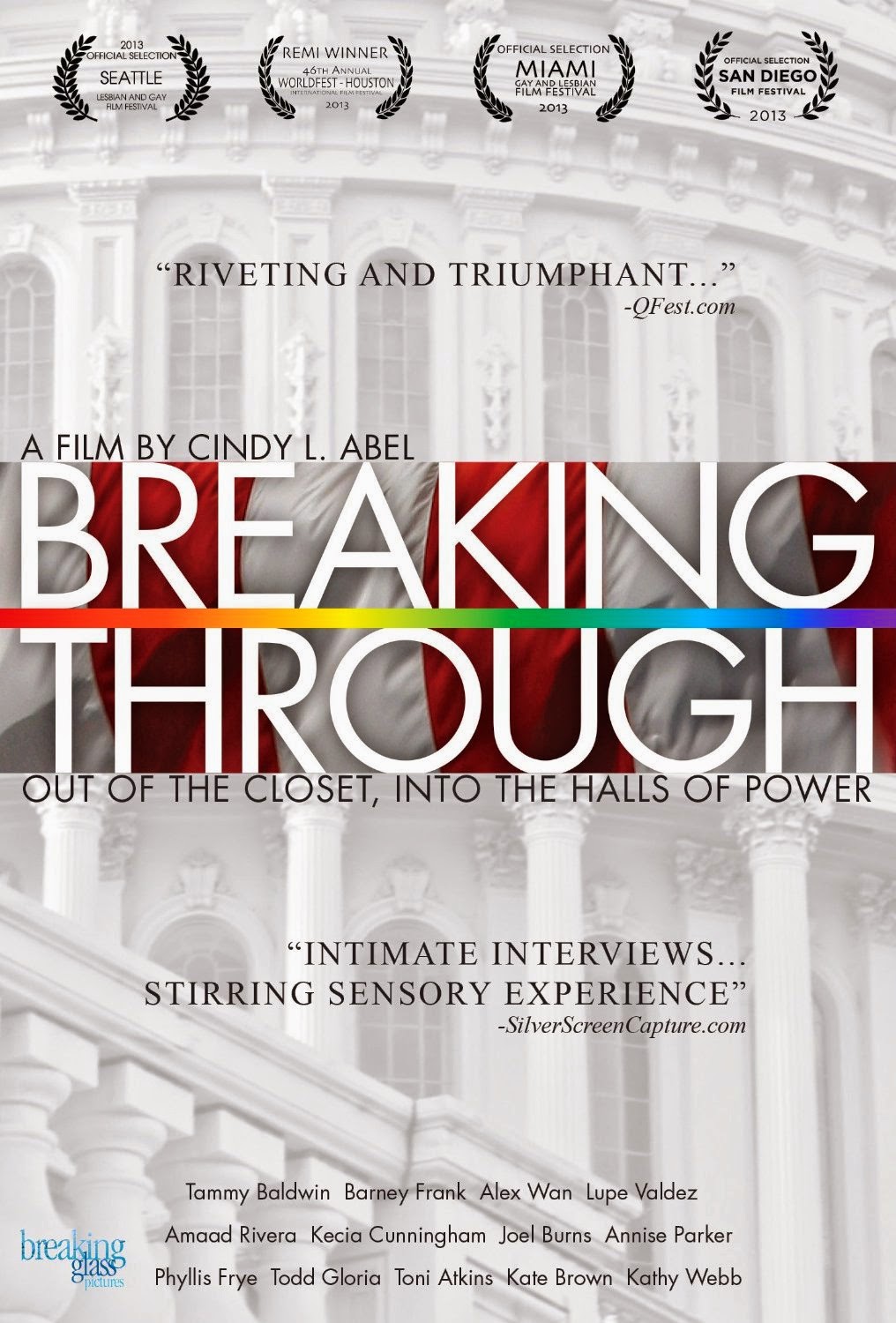 Breaking Glass Pictures recently send us over information for their upcoming release "Breaking Through". The film has played at film festivals such as Philadelphia QFest, Sidewalk, Little Rock, San Diego, Oxford, Out on Film and the Miami Gay and Lesbian film festivals.

The DVD will feature an extended director's cut, the festival cut, a music video and a featurette on the filmmaker's journey. "Breaking Through hits DVD and VOD on June 17th.

Breaking Glass Pictures and QC Cinema are proud to present the award-winning documentary Breaking Through on DVD and cable (Comcast, Time Warner, Verizon) and Internet VOD (iTunes) on June 17, 2014. A documentary about people, pride and power, Breaking Through features several openly LGBT elected officials and their journeys from self-doubt to triumph. The Special Edition DVD of Breaking Through (SRP $19.99) will include an extended director's cut, the festival cut, a music video and a featurette on the filmmaker's journey.

Directed by Cindy L. Abel, Breaking Through profiles elected officials who represent "firsts" in their respective positions. Featured officials include Tammy Baldwin, the first openly gay U.S. Senator in history, Alex Wan, the first gay man to serve on the Atlanta City Council, and Kathy Webb, the first openly gay Arkansas State Representative. The documentary reveals their past struggles with poverty, bullying and religious expectations, in addition to their sexual orientation and gender identity.

"We made Breaking Through to encourage people who are wondering if their life is worth living," said director Cindy L. Abel. "Now it is accessible to all those that want to see real-life examples of overcoming obstacles and living authentic, fulfilled lives. I'm thrilled these surprisingly vulnerable, deeply personal stories will be shared with a national audience." Breaking Through is director Cindy L. Abel's first full-length documentary. Abel formed Atlantis Moon Productions in 2007 to create film-related projects that impact popular culture. Abel also directed shorts Disturb The Universe and Back to Salem.

Praised by The Huffington Post as "a rich, fast-paced, spelling binding film," Breaking Through has been a hit at festivals nationwide, including Philadelphia QFest, Sidewalk, Little Rock, San Diego, Oxford, Out on Film and the Miami Gay and Lesbian film festivals. Breaking Through was awarded a Remi at WorldFest Houston and the Audience Award at QFest Ft Worth, and was a jury award finalist at Moondance Film Festival.
at 5:55 PM
Labels: Breaking Glass Pictures, Breaking Through, Documentary, DVD News, VOD News