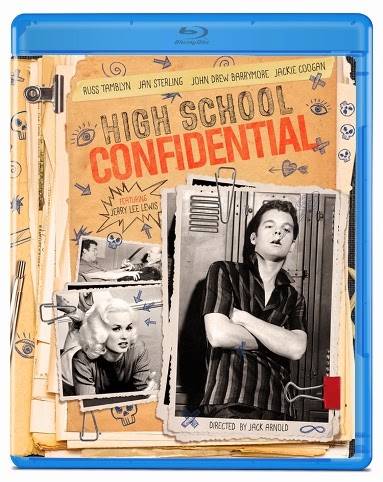 Olive Films recently send us over information for their upcoming release on "High School Confidential". The  50's high school film is directed by Jack Arnold (Creature from the Black Lagoon, The Incredible Shrinking Man) and stars Russ Tamblyn (West Side Story) and Jackie Coogan (“The Addams Family”).

No special features were announced at this time. "High School Confidential" hits DVD and Blu-Ray on August 26th.

Olive Films releases, one of the wildest, rockinest, flipped-out flicks of the ‘50s, High School Confidential!, on Blu-Ray™ and DVD August 26th. Directed by Jack Arnold (Creature from the Black Lagoon, The Incredible Shrinking Man) and released in 1958, this is one of the most memorable and iconic B-movies of all time and remains a campy cult classic with its exploitation essentials of bad girls, fast cars and raunchy rock and roll. Part crime story and part teenage delinquency drama, High School Confidential! is an unforgettable piece of trashy film history that was awarded a Golden Raspberry Award as one of The 100 Most Enjoyably Bad Movies Ever Made.

Fanning the flames of Eisenhower America's growing paranoia High School Confidential! is the quintessential juvenile delinquency film that celebrates the very sex-drugs-and-rock'n'roll culture it pretends to condemn. Staring Russ Tamblyn (West Side Story) as Tony Baker, the new kid at Santa Bellow High, whose cocky attitude and ambitious weed-dealing enable him to infiltrate the gang of a local narcotics boss played by Jackie Coogan (“The Addams Family”). But High School Confidential! is much more than a hardboiled crime picture. It's is a pop-culture touchstone, a Rebel Without a Cause without the angst, The Wild One, but even wilder!