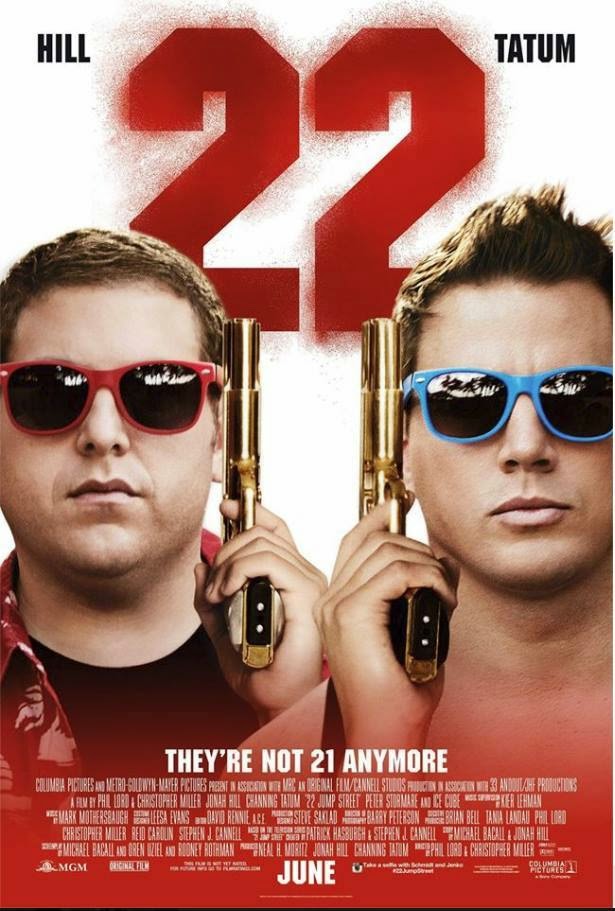 Jonah Hill and Channing Tatum once again team up for this buddy cop sequel, to the 2012 hit '21 JUMP STREET' (loosely based on the 80s TV show of the same name). It was once again written by Hill and Michael Bacall, this time along with Oren Uziel and Rodney Rothman. Phil Lord and Christopher Miller returned to direct the movie; they've gained a lot more celebrity status since directing the first one, for directing and co-writing 'THE LEGO MOVIE' (released earlier this year). I don't think this installment is as consistently funny (or as well made) as the original but it still has a ton of great laughs.

The sequel has Officers Schmidt (Hill) and Jenko (Tatum) now going undercover as college students (as opposed to high school ones, like in the first movie) to catch the drug supplier of a new deadly drug called 'WHYPHY'. Also unlike the first movie Jenko is now the popular student, once again (and becomes really good at football), and Schmidt is a picked on nerd, once again. Jenko also makes friends with a jock named Zook (Wyatt Russell) while Schmidt starts to develop a romantic relationship with an art student named Mercedes (Jillian Bell). The two grow further and further apart while also blowing their case. Ice Cube, Nick Offerman, Rob Riggle and Dave Franco also reprise their roles from the first movie.

The film is of course, once again, all about Schmidt and Jenko's relationship and how it's jeopardized by their new fake identities (returning to school life). Hill (like his buddy Seth Rogen) is a master at these exaggerated male (friend) relationship movies. The story is pretty predictable, and it is kind of just a rehash of the original movie, but there's still a lot of great jokes and Hill and Tatum have beautiful chemistry together (once again). People, that are looking forward to seeing a movie like this, should know to expect a male bonding (spoof) commentary with lots of silly jokes (mostly gay or 'not gay' ones). It's not as funny as the original movie but it still delivers the laughs; they're just a little more hit-and-miss this time. More hit than miss though (once again).
at 5:01 PM
Labels: 22 Jump Street, Channing Tatum, Columbia Pictures, Jonah Hill, Reviews