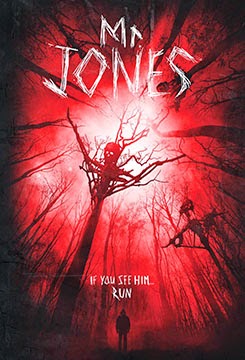 Every time when I hear “Mr. Jones”, it reminds me of the 90 rock band Counting Crows song of that title. It’s a great song, but that’s not what I’m here to talk about today. It’s the title of the latest horror release from Anchor Bay Films. Going into this, I was skeptical about it at first. It’s a horror film with scarecrow imagery and those usually never work for me, as it usually sends me running to the next film. The other thing that it has going is the fact that it’s rated PG-13. Don’t get me wrong, sometime PG-13 horrors works but it fails most of the time. Still, I’ve heard a couple of people liked this film, so I decided to give this one a shot.

The film follows Scott (Jon Foster) and Penny (Sarah Jones), who moved from the big city to a remote cabin to film a documentary of their relocation. The two discover that there not alone, as they find out that a reclusive artist known as Mr. Jones lives near their cabin. Soon, Scott and Penny set to find out more about this mysterious person. They soon find very strange objects and sculptures in his house and in the woods. As they continue to find out more about him, Scott and Penny are drawn into a nightmarish world of madness and confusion. Can the couple find a way out of this nightmare before it suck them in forever?

Sometimes when I go into a film that I’m not interested in, I’m going into it thinking that I’m not going to enjoy it. I felt the same way going into “In Fear” and I enjoyed it. Still, I didn’t think that I was going to enjoy this film due the factors that I listed in the introduction. After watching this film, I was very surprised that “Mr. Jones” was a very intense and well-made horror film.

One of the things that makes this film good was the fact that it has very good direction from writer/director Karl Mueller, who wrote the screenplay to the 2011 film “The Divide”. What I liked about the direction was the fact that everything felt intense. From the way the film was shot to the atmosphere that’s projected in the film, it helped make some of the film’s action feel penetrating. It helped contribute to the film’s success. The other thing that makes the direction good was the way that he directs his main cast. Mueller does a very good job makes sure that his lead cast had chemistry with each other especially with the film’s intense scenes. Both Jon Foster and Sarah Jones’s performances were very good. It helped made their characters interesting and made some of the action work so well.

The screenplay also written by Mueller does a very good job crafting an interesting and intense story. One of the things that I liked about the screenplay was the fact that this felt like a part faux documentary, part found footage film part suspense film. By blending in those elements together, it helped make the film interesting and have a different tone than most horror films. It gave the feeling of a different type of horror film that I've hadn't seen in a while. The other thing that I liked about the screenplay was the fact that it had a dark and serious tone to it. It consistently keeps its tone throughout the story including some of the films bizarre scenes which helped the intense feel to it. It made the story entertaining and it provided some very good jump scares that you don’t see in most PG-13 horror films.

I’m very surprised that I enjoyed “Mr. Jones” a lot considering the factors the film had going in to it. With an intense story and very good direction from first time director Karl Mueller, “Mr Jones” is an intense and scary ride from start to finish.