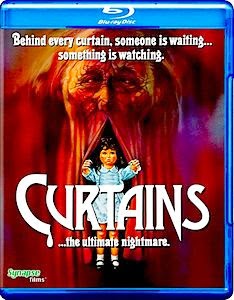 John Vernon (CHAINED HEAT, National Lampoon’s ANIMAL HOUSE) and Samantha Eggar (THE BROOD, THE EXTERMINATOR) star in this horror classic from the golden age of the slasher genre.

A group of women gather for a weekend casting call at the secluded mansion of director Jonathan Stryker (Vernon). He’s searching for the perfect woman to play the role of the crazed character “Audra”, and these women are just dying for the chance to play her! Stryker’s last star, Samantha Sherwood (Eggar), is so determined to get the part, she committed herself to an asylum to prepare for the role. Unfortunately for all, a crazed killer in a disgusting “hag” mask is viciously murdering everyone one by one. Who will survive the final curtain call?