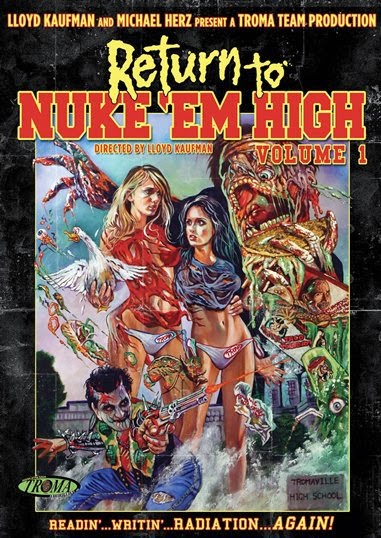 “Return to Nuke’em High Vol 1” is a film I've been waiting to see, since hearing about it a year and a half ago. The film is the latest from Troma president and creator of “The Toxic Avenger” Lloyd Kaufman, who has directed some crazy and entertaining films like “Tromeo and Juliet”, “Terror Firmer” and “Poultrygeist”.

The film takes place at Tromaville High School where Chrissy (Asia Paredes), a high school blogger falls in love with Lauren (Catherine Corcoran), the new rich girl at school. Meanwhile, an organic food company that was built over the ashes of the Tromaville nuclear power plant is selling containment food to the high school. The food starts turning the smart people of the high school into mutant and rebellious cretins. Now, the two must solve what cause these mutations and save the high school from these cretins.

It’s always amazing that every time I watch a Lloyd Kaufman film, I always have a fun time.  Whether it’s the zany characters that appears in his films to the over the top violence, I never get tired of it. It was the same case with “Return to Nuke’em High Vol 1”, as I had a great time with this film.

Co-writer and director Lloyd Kaufman does a very good job with the film’s direction. What makes his direction work, he handles and balances the film’s humor and horror elements. Kaufman does a very making the humor funny. Whether it’s the raunchy gags to the some of the film’s laugh out loud moments, everything comes off as funny and entertaining. The other thing that I was impressed was the way that he uses the film’s gore and slime effects to his advantage. I thought that aspect looked a lot better than in previous Kaufman films. Everything comes off looking very good on screen and it helps drive the horror aspects of the film as it comes off as horrific.

The acting was over the top but it works very well with the film’s story. Kaufman does a very good job making sure that his cast has chemistry with each other. He takes his time and makes sure the performances gel very well. It helps with a film like this, as I was interested in the characters and all of the happenings that went on during the course of the film.  It made the film very entertaining and fun.

“Return to Nuke’em High Vol 1” is a very fun and crazy horror film that leaves you wanting more. Can’t wait to see how part 2 shapes up.