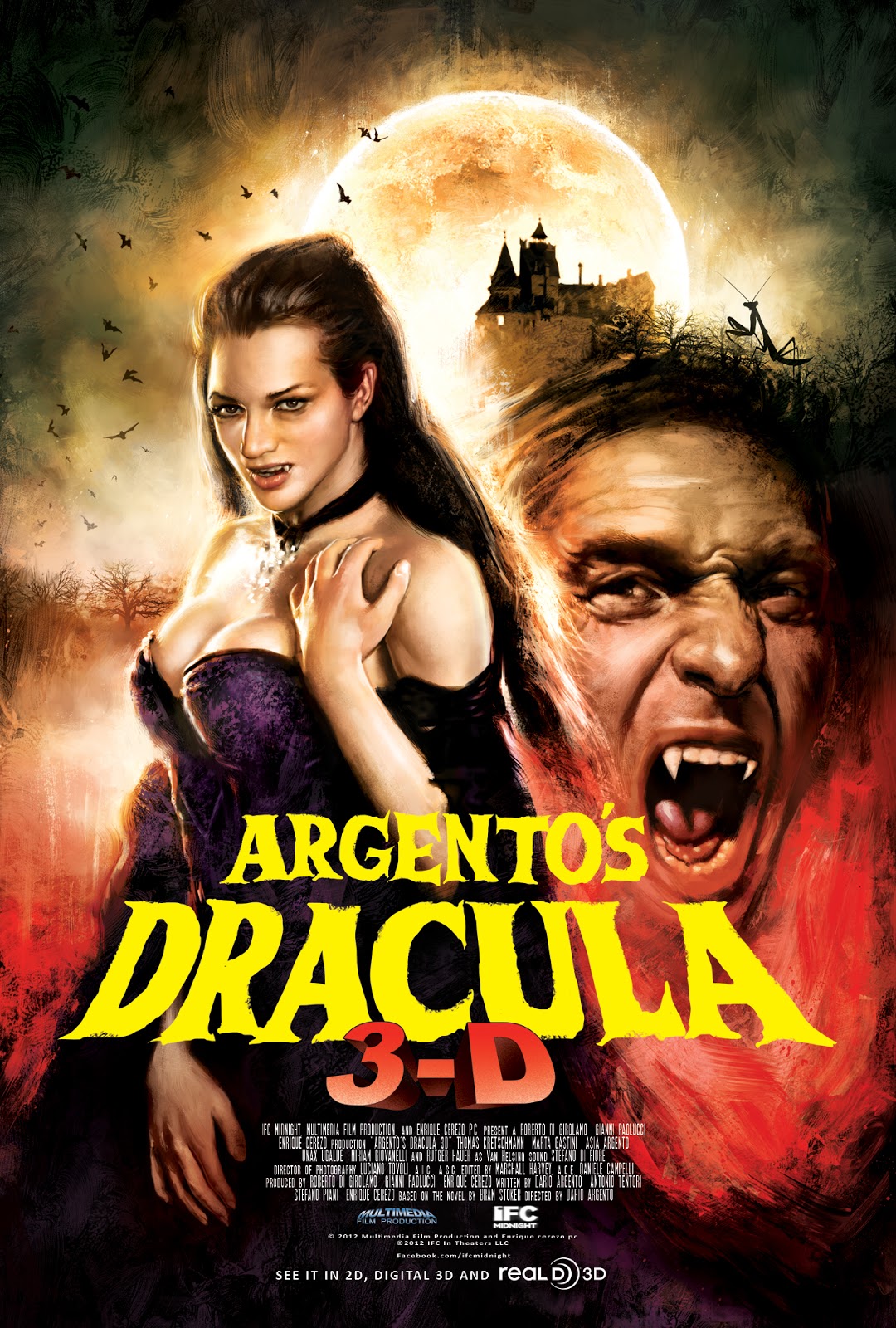 With the fact that we had to change our web address and couldn't transfer our work to the new address, I wanted to repost my review of Dario Argento's Dracula which hit DVD and Blu- Ray a month ago. Here is my review of the film that I did in October of last year.

The review is for the 2D version

Over the last couple of years, I’ve been very entertained by the films of Dario Argento. Whether it’s the Three Mothers Trilogy (Suspiria, Inferno, Mother of Tears) or films like “Opera” and “Tenerbre”, they’ve managed to be suspenseful and entertaining. With his latest film “Dracula”, I wasn’t expecting much as this seems more generic than his previous films.

The film is a young man, who is sent to Dracula’s castle to catalog his library. He becomes enticed by Dracula and goes missing. A couple of days later his fiancée arrives to find out that he has going missing. Staying with her best friend Lucy who is under the spell of Dracula, she starts to find out about Dracula. Later, she runs into Dr. Van Helsing, who’s out to put an end to Dracula’s reign of terror. Can they find a way to stop Dracula before his reign of terror threatens the whole town?
Going into “Dario Argento’s Dracula”, I thought that I was going to hate the film. The film had a lot of bad buzz going in plus Argento’s last film “Gallo” was flat out awful. I thought that this was the film that was going make me lose faith in Argento. Even though this is not one of his best films, I still had a good time with Argento’s “Dracula”.

Argento’s direction was very good. He does a good job making sure the film had a very dark and gothic look and tone to it. It helped made the Dracula character very dark and right for the time period. It was also one of the things that kept me interested and liking this film. The other thing that makes Argento’s film work for me was the acting. He does a very good job in getting the performances to fit the film’s tone and made sure there was chemistry between his cast. Thomas Kretschmann who played Dracula in the film was good in the role. He made the character very dark and mysterious, which made the character very Gothic. It’s what the famous vampire should be like on screen.

The screenplay written by Argento, Enrique Cerezo, Stefano Piani and Antonio Tentori was good for the most part. One of the things that made this screenplay good was the fact the film had consistent tone. This was one of the most gothic and bloody Dracula films that I’ve seen in while. The film had a dark tone that gave the story its gothic feel. It helped kept my interest, since I like my vampire films to have this tone. The other thing that this screenplay does right was the way they made Dracula very mysterious like. Whether it’s the look of the character or the way that he supposed to interact with the characters on the page, it made this Dracula look very dark like in the Universal classic films or the Coppola version. It made the character interesting, as I was glued to seeing his next move.
Even though this is a positive review, there were a couple of things that I didn’t like and bugged me. The first thing was the editing. The transitions from one scene to another felt rushed and ruined the flow of the film a bit. It just felt it was edited too fast or didn’t transition well to the next scene. Thankfully, that was kept to a minimum as that didn’t become too distracting for the most part. The other thing that I didn’t like was the way that Van Helsing was used. I thought, he should’ve been used more in the story considering that he’s an important character in “Dracula”. But once the character came into the story, it was used properly made me forget that he was not there throughout the first half of the film.

This is one of those films that I’m going to get criticized for liking, but it manage to keep my interest despite the flaws. “Dario Argento’s Dracula” may not be a perfect film, it’s one of the most gothic adaptations that I’ve seen of the story in a while and its worth checking out.