"Battle of the Dammed" Review - Written by Anthony T 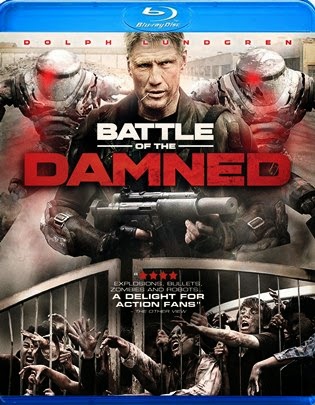 Going into “Battle of the Dammed”, I was hoping that this would be a fun and entertaining film. With the fact that it stars Dolph Lundgren and looking at the cover of the film, I was interested in this film almost immediately to the point that I couldn’t wait to review this.

The film is about a deadly virus that is unleashed on a town. The whole population has been barricaded off from the rest of civilization. A rich industrialist is desperate to find his daughter who is trapped in the town. His only hope is a former commando (Lundgren) who has one day before the bombs start dropping in the town. When he finds the girl, he also comes across a band of survivors that are trapped. Now with the aid of killer robots, the commando must find a way to get the survivors out before the town is engulf in flames.

I was really hoping that I would like “Battle of the Dammed” with the fact that it mixed zombies and robots. It all sounded good on paper. In the end, I’m a horror fan that wants bloody action and good storytelling and this didn’t deliver on it at all as this honestly felt more like an action film.

Writer/Direction Christopher Hatton’s direction felt flat on all level. One of the problems that I had with it was that it felt chaotic at times with characters running around. He lets all the action scenes be the scenes that stand out. It doesn’t give any time for it to focus on any of its characters. The film felt like a collection of action scenes. It would’ve been nice to have some of that focused on the acting aspects. Speaking of the acting, it’s like he wanted to pay more attention to the action scenes. The acting was bad from beginning to end. Hatton doesn’t do a good job paying attention to his cast’s performances. Either the performance were either flat with no personality or overacted to the point that I didn’t care about the performance. It made me uninterested in the action.

The screenplay from Hatton was even worse. The major problem like was the action scenes. It felt like it took over the film. The set pieces were created to make sure that you only focus on the action, as none of the character were focused on that much in the film. It takes over the film to the point that the death scenes were badly created because Hatton focused on great creating action scenes and trying to make this film cheaply instead of pleasing us horror fans. I don’t mean to repetitive but this is what made this bad. The other thing that I didn’t like was that he neglects the fact that you need to create interesting characters to make your film interesting. The characters had no depth to them, as you don’t get much character development in this film. The reason for that was there was too much action in the film and less time spend on the characters. It could’ve used more time, as the characters felt flat throughout the whole film. It made it for a very bad experience.

This could’ve been an interesting film considering the concept, but flat characters and the fact that this felt like an action film ruined it for me. “Battle of the Dammed” has a good concept but the execution is horrible.

Review Rating: One Star
at 7:07 PM
Labels: Battle of the Dammed, Reviews