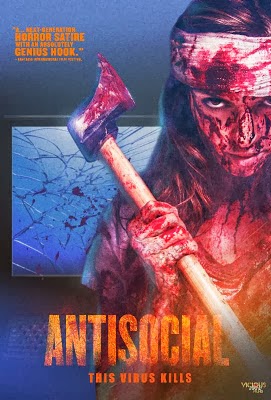 “Antisocial” is a film that I first heard about during last year’s Fantasia Film Festival. The stills and plot caught my interest immediately. So when it came time to review this film, I was excited about this film but I was still cautious as there’ve been films that I’ve been excited for in the past and turned out to be a dud.

The film follows five college students who are throwing a New Year’s Eve party. Unknown to them, there is chaos running in the streets. An epidemic has erupted outside, as people are being turned into monstrous killers. Trapped in the apartment, they barricade themselves in the house with their phones, laptops and other devices. Soon they discover what’s causing all of this and realize that there isn’t a safe place from this chaos and infection.

Once in a while, I sometimes come across a low budget horror film that captures your attention and interest for its complete running time. “Antisocial” does this very well, as this is one of the most interesting and intense biological horror films that I’ve seen in a while.

One of the reasons for this is Cody Calahan’s direction. His direction was very good from start to finish. What makes it very good was the way that Calahan approaches his film. This film had an intense and dark feel from start to finish. From the way that the scares worked to how the action was executed, everything had an intense feel to it. It helped make the film entertaining and not a boring horror virus film. The other that I liked about the direction was the way Calahan directs the performances. He makes sure that the performances had a dark tone, while making their characters interesting. The performances added to the tension of the film and made it enjoyable in the process.

The screenplay written by Calahan and Chad Archibald was well executed. One of things that makes this screenplay good was the fact that the concept work so well. I know that the story had a “Pulse” vibe to it, but this felt original. I feel this way, because I haven’t seen a biological virus film that deals with the way that the entity is distributed through social media. It made the story have its original feel to it. The other thing that I liked about the screenplay was the fact that it was scary and dark from start to finish. The writers did a very good job with the way that they kept the action moving. It felt scary and downright intense. That’s what separates good horror films from great ones like this film. It’s nonstop intense action from start to finish.

The DVD extras start off with the film’s commentary track featuring director/writer Cody Calahan and director of photography Jeff Maher. This a very good track, as it goes into the production of the film and how some of the effects were created. It made this commentary interesting and provide an in depth look into the making of the film.

After the commentary track, there’s a behind the scenes featurette of the film. The featurette features interviews from the cast and crew that worked on the film. The featurette does a very good job going into the how the concept came about and how the cast and crew approached some of the film’s scenes. It’s worth checking out. The disc then wraps with the film’s trailer, trailers from other Breaking Glass Pictures releases and photo gallery.

I truly hope horror fans seek this film out, as this was a great film filled with scares from start to finish. “Antisocial” is one scary film that will make afraid of social media.