"The Stone Roses: Made of Stone" Review - Written by Anthony T 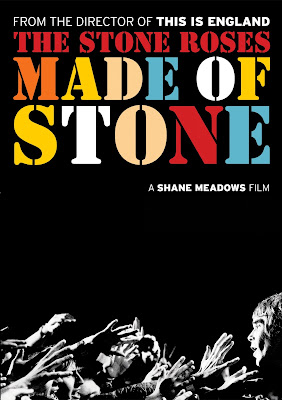 One of things that attracted me to “The Stone Roses: Made of Stone” was the fact that it dealt with 90’s rock music. As a big fan of that period of rock music, I’ve enjoyed the fact the songs had pure emotion and music was loud. With a great track record of great rocks documentaries lately such as “Pearl Jam’s Twenty”, “Hit so Hard: The Life and Near Death Story of Patty Schemel” and “Foo Fighters: Back and Forth”, I decided to check out this film.

The film directed by “This is England” director Shane Meadows. It follows the rock band The Stone Roses as they reformed the band for the first time in sixteen years. He uses his style of directing to document all the emotion and humor the band encounters throughout their career. From rare interviews and never before seen archive footage to following the band during rehearsals of their reunion tour, it a portrait of one of Britain’s most popular rock bands of the nineties.

Going into this film, I wasn’t that big of a Stone Roses fan. The only song that I remember of the band was the single “Love Spreads” which I first heard in 1995 on the radio. Still, I was interested in this because it was a 9o’s rock documentary and the fact that the film was from Shane Meadows, who did the excellent film “This is England” years ago. Thankfully, I decided to check this film out, as I thought this was a very interesting documentary.

Shane Meadow did a very job with making this documentary work for those who may haven’t heard of the band. One of the things that I liked about this was the way that he blends the archival footage/interviews along with the footage that he shoot during his time with the band. It made everything feel interesting, as I was interested in the history of the band and what was going on during their reunion. The other thing that makes this part interesting was the fact that I liked how he presented the footage was shot. Whether it was in black and white during the rehearsal portion or full out color for the big performances, the look of the film had a music video feel to it. This really helped made me glued to the film to the point that I couldn’t take your eyes off it.

The other thing that makes this documentary good was the fact that it was a little unconventional by including the director’s thoughts through the rehearsal process. It gave a glimpse to what the director was experiencing on the road with the band. Whether it’s about the band that he likes to the troubles that occurred while following the band, it was nice that you get hear it from his point of view. It provided an interesting look while not being too intrusive to the point that the film feels like a tabloid piece.

“The Stone Roses: Made of Stone” is an interesting portrait of one of Britain’s most popular bands of the nineties. This is worth checking out for movie fans that are into the alternative rock scene of the nineties.