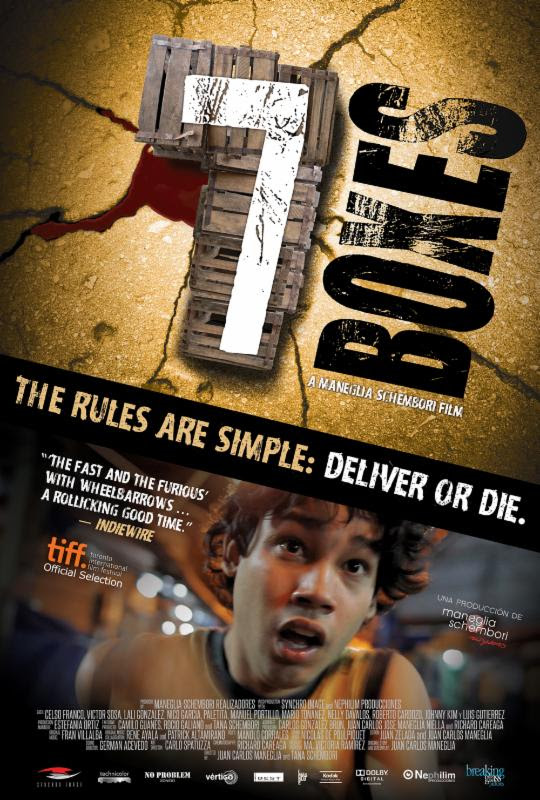 Breaking Glass Pictures and Shoreline Entertainment are pleased to announce the February 7th North American theatrical release of 7 Boxes, the debut film from the directing team of Juan Carlos Maneglia and Tana Schembori. The film had its world premiere at the International Film Festival of San Sebastian to audience and critical acclaim and broke box office records in its native Paraguay. An official selection of the 2012 Toronto International Film Festival, Indiewire hailed the Paraguayan action-thriller as "The Fast and the Furious with wheelbarrows."

7 Boxes will open in cities across the United States and Canada starting on February 7th, anchored by screenings in New York, Los Angeles, and Toronto. On the same date, the film will be available nationwide on iTunes and on Demand.

Víctor, a 17-year-old wheelbarrow delivery boy, dreams of becoming famous and covets a fancy TV set in the infamous Mercado 4. He's offered a chance to deliver seven boxes with unknown contents in exchange for a quick $100. With a borrowed cell phone the contractor uses to tell him the way, Víctor embarks on the journey. Crossing the eight blocks of the market seemed easy but things get complicated along the way. There is something in those boxes that starts a high-speed wheelbarrow chase in the secret and gloomy corridors of the market. Without even realizing, Víctor and his pursuers will get involved in a crime of which they know anything.
at 2:06 PM
Labels: 7 Boxes, Breaking Glass Pictures, Indie News, Shoreline Entertainment