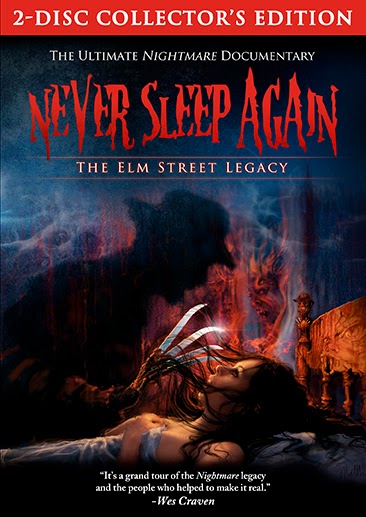 Out of all of the horror franchises that have been in existence, the “Nightmare on Elm Street” franchise has always been my favorite. One of the reasons for that was the fact Freddy Kruger is always entertaining even though he’s always been the main villain. Recently there’s been a documentary on that character and the franchise that has recently been re-released courtesy of Image Entertainment called “Never Sleep Again: The Elm Street Legacy”.

Freddy Kruger is known as one of the icons of the horror genre. For decades, the character has slashed and haunted the dream of many teenagers on screen. The documentary highlight all six of the “Nightmare on Elm Street” films plus Wes Craven’s New Nightmare and showdown between two of the greatest horror icons in “Freddy vs Jason”.

There have been some great horror documentary that I’ve seen in my life with films that explore the horror genre like “Nightmares in Red, White, and Blue” to documentaries that focuses on a horror franchises like the recent “Crystal Lake Memories: the Complete History of Friday the 13th”. But “Never Sleeps Again: The Elm Street Legacy” is possibly the best horror documentary ever made.

From start to finish, this was a great documentary on the franchise. Directors Andrew Karsh and Daniel Farrands did a very good job with the way that they were able to get a lot of backstory for each of the entries in the “Nightmare on Elm Street” series. From how the effects were created to some of things that went on during the making of each of the films, they made sure that the actors, actresses, directors and everyone else involved went into detail with their characters and their time with the films that they were involved in. It had an inside look that you don’t see in many documentaries about horror franchises. The other thing the directors do very well was to go over some the franchises most iconic scenes. I liked, the fact that you got a chance to reminisce those scenes that helped make this franchise what it is in horror history. This was something that was lacking in earlier horror documentaries like “His Name Was Jason” and “Halloween: 25 Years of Terror”, as they was good but didn’t focus on that so much. I was very thankfully that I got this with his documentary. This really helped make this film very interesting and very informative for me as a fan of the series.

Another thing that I liked about this film was the fact that this film moves at a good pace for a four hour film. This could’ve been one of those documentaries that took forever, but Karsh and Editor Michael Benni Pierce did a great job making sure that there isn’t many moment where a certain interview lagged or went to another place. Never did I get a sense that I was bored, as everything moved very well. It helped make this film enjoyable, as I had a fun time revisiting the franchise.

This is a must see documentary for any fan of Freddy Kruger and the Nightmare on Elm Street films, as this is the definitive documentary goes into everything that you can imagine about the series. “Never Sleep Again: The Elm Street Legacy” is the gold standard when it comes to horror documentaries.