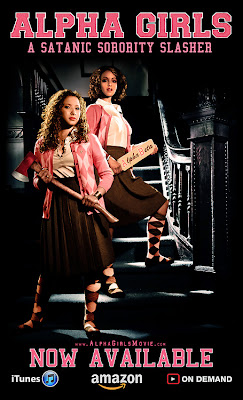 I’m starting 2014 with some devilish fun. “Alpha Girls” is one of those films that caught my attention immediately when I first heard about it. It look like it was going to be one of those fun films that I would enjoy.

The film is about a troubled student (Falon Joslyn) who goes to a new school and joins the sorority Alpha Beta. Her initial experiences in the sorority are bad as she and her rush class are humiliated. She becomes close with another pledge (Beverly Rivera) who has a mystical gift. Soon, she begins to discover that something devilish is going on at the Alpha house. The house is possessed by some demonic force. She must find a way to save herself and put an end to all of the devilish things that are going on in the Alpha house. “Alpha Girls” also features special appearances from Ron Jeremy (The Boondock Saints) and Schoolly D (Aqua Teen Hunger Force).

Going into “Alpha Girls, I was expecting something campier considering the fact that the beginning felt that it was going that way. To my surprise it didn’t go that route, which helped make the film a better and effective film.

One of the things that I liked about this was the direction. Directors Tony Trov and Johnny Zito did a very good making the film fun while having a horror/comedy vibe to it. It really shows, as I enjoyed the way that some of scenes were directed. Whether it’s the way the film was shot to how the horrific scenes were looked, it did a good job keeping my interest. The other thing that I liked about their direction was the fact that the main performances were good. Trov and Zito did made sure the performances were just about right in terms of how the characters are supposed to be. The performances didn’t feel too campy or over the top, as it helped me get into the film’s story and made me interested in the material.

The other thing that I liked about the production aspects was the way the film looked. The look of the film had the feel that it was professional shot, as it helped make look visually pleasing. Cinematographer Rory Hanrahan does a very good job making sure that he gets that aspect of filming to stand out along with the film’s story. He made the film look much better than it was supposed to on its limited $28,000 budget.

Trov and Zito’s screenplay also helped made this film entertaining. One of things that makes this screenplay good was that it develops its characters. The screenplay spends a good amount of time developing the main characters. It made them interesting to watch and it also made the story better. The other thing that this screenplay does well was that it played like a straight horror comedy than a camp fest. By them doing it that way, it allowed for the dark humor to work and made the horror scenes effective. Trov and Zito also toned down the camp factor, as the story focused more on the characters and the film’s plot. It made the film better, as I was expecting something completely different.

“Alpha Girls” is devilish fun, as it has a good story and very solid direction that keeps you possessed.

To see this film, you can goto: http://www.amazon.com/Alpha-Girls-Satanic-Sorority-Slasher/dp/B00E9F47R4 or any participating VOD providers.

For more information on this film, you can visit the film’s official website at: http://www.alphagirlsmovie.com/

Review Rating Three and a Half Stars.
at 2:13 PM
Labels: Alpha Girls, Reviews