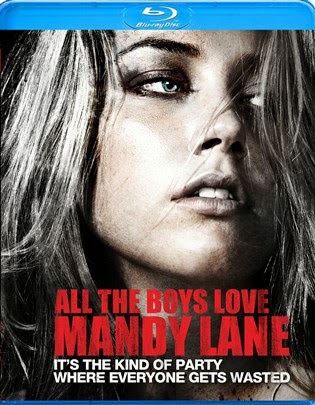 I remember seeing “All the Boys Love Mandy Lane” about a year and a half ago, as I owned the import Blu-Ray of the film due to the U.S. rights being tangled up due to the closure of Senator Entertainment. It had been unreleased in the States since the film was originally completed in 2006. Thankfully last year after years of entanglement, the film was released on the Weinstein’s sublabel Radius-TWC.

The film follows Mandy Lane (Amber Heard), who goes on a weekend getaway with her friends at a ranch that is located in the middle of nowhere. Things are going fine, as she and her friends are having fun. But as the day becomes dark, someone has decided to crash the party and start a killing spree. As everything takes a disturbing turn, Mandy Lane’s weekend on fun turns into an endless night of horror. “All the Boys Loved Mandy Lane” also co-stars Anson Mount (Hell on Wheels) Whitney Able (Monsters) and Michael Welch (The Twilight Saga).

It was very good that I got a chance to revisit this film, even though it was sad that it was lost for all of those years due to legal battles. After watching this film again, this is still a very good film from a visual and story stand point.

Director Johnathan Levine (50/50, Warm Bodies) does a very good job with the way that handles the direction. What makes his direction so good is that he keeps the film moving through the development parts of the story. Whether it’s the way the film was shot to how he directs and approaches the scenes, it keeps you interested with the film’s story and its characters. The other thing that Levine does well was to make sure the acting fit the film’s dark tone. He does a good job making sure that the performances keep you interested with the characters throughout the story. It helps makes the film’s characters interesting, as you feel like you’re watching an effective slasher film instead of something stupid.

The screenplay written by Jacob Forman does a very good creating a slasher film that is dark rather than normal cheesy type that most slashers end up being. One of the things that makes the screenplay work was the way that he spends time developing the characters. It helped set up the film’s dark tone and helped made the characters interesting. That’s what helped this film be successful from a story point. The other thing that makes Forman’s screenplay good was the fact that it builds to a very shocking ending. That was done effectively, because of the way the kill scenes were spaced out in this film. It wasn’t going at a fast pace, as it focuses on building the story and its main character through its course. It allowed for the story to develop and helps makes the ending effective instead of something that came out of left field.