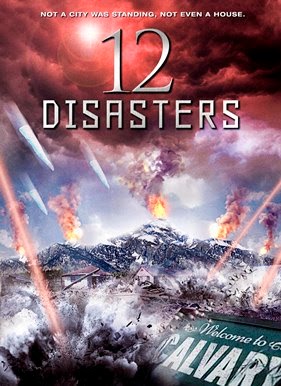 I was hesitant at first about watching “12 Disasters”, as this wasn’t a film that was on my radar. The only reason that I gave the film a chance was that it was directed by Steven R. Monroe, who directed the “I Spit on Your Grave” remake. I figured, this film would be a good film consider who directed it.

The film take place a nice and quiet mountain village of Calvary, where everything is merry and Christmas lights are shiny as Christmas approaches. Things start taking a turn for the worse, when an 18 year girl discovers that she has an unexpected gift that holds the key to the apocalypse. Now with the help of her father, she must find five golden rings to help stop this all of these apocalyptic tornados, volcanoes and killer icicles that threatens to obliterate life on earth.

Will someone tell me, if SyFy even looks at the film’s script before green lighting or purchasing TV rights to a film because the film was awful. I knew that I should have listened to my first instincts about this film because “12 Disasters” is a disaster from start to finish.

I truly believe that this isn’t the fault of the director or cast, as they worked with what they had. Director Steven R, Monroe does a solid with his direction. One of the things that makes the direction solid was the fact that he and his special effects team handles the death scenes. It had a gory and effective feel to it, which was surprising considering that I was expecting no gore at all and bad special effects. Thankfully, that wasn’t the case. The other thing that Monroe does well was to get the performances to be passible. The cast tried to make this film work, as they tried to make their characters interesting. It’s the fact that the screenplay was awful.

Speaking of that screenplay, did the writers even try to write a script because this film became so stupid after the opening credits? Writers Rudy Thauberger and Sydney Roper didn’t spend any time with creating character development. They were focused on making sure the action comes quick and fast at the expense of character development. I wasn’t interested in any of these characters, as I wasn’t given a reason to care about them from a screenplay standpoint. The writers were making the kill and disaster scenes its main priority, which hurts the story. When that happens, the film is going to feel like a collection of scenes. That was the case with the story. The other thing that makes this abysmal was the fact that everything was rushed. Not even 10 minutes into the film and the main action sequences start. There was no chance to set anything up. It would’ve been nice if it slowed down, but the writers crammed in all these action sequences because they didn’t care about storytelling. It made me wonder, why Steven Monroe couldn’t write the screenplay. This could’ve at least had some interesting characters and be a better film.

This could’ve been passable with its direction, but the lack of a screenplay ruins this one for me. “12 Disasters” is another SyFy film that rushes everything without making the essentials work and ending in complete disaster.